Fred Williams On LANTA Board for 30 Years 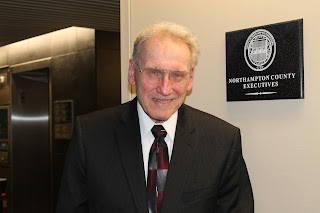 Northampton County Council enthusiastically and unanimously voted last night to give affable Fred Williams another four years on the LANTA Board. Though Williams at one time owned an Exxon distributorship, he prefers walking or taking the bus to driving. In 1987, he saw then Executive Gene Hartzell soliciting voters one day as he he waited for a bus to take him to his home at College Hill. Hartzell was a bit confused to see a prominent local businessman using public transit, but Williams told Hartzell he loved riding in buses. Two days later, Williams received word he was on LANTA's board. He is currently their Treasurer.
Posted by Bernie O'Hare at 2/17/2017 12:36:00 AM

Drop him off t Gracedale... We are tired of career politicians and bullshit. 30 years is way to long and creates corruption

He's not a politician! He is an ordinary citizen volunteer who gives his time to serve the public. I ride LANTA routinely and I can tell you the quality of services has grown incredibly over the past 5-10 years, with extended evening and weekend hours The Fred Williams inter-modal station on 3rd Street in Easton is such a nice facility that is used by LANTA, NJ Transit (service to Pburg) and Transbridge for service to Clinton, EWR and NYC. Stop by this facility sometime and watch the young, old, disabled and riders like me sitting in a clean comfortable station waiting for the bus. Instead of taking an anonymous potshot at a good guy, why not commit to follow his example and leave the car at home occasionally and ride the bus somewhere!

7:51. I was trying to think of a fair and intelligent response but the only one that seems appropriate is YOUR AN ASSHOLE

Congratulations to Fred. However since the late great Steve Schmidt left the Board (and may God bless him with restful eternal peace) there continues an absence of an actual regular, daily consumer of Lanta services. An occasional whirl around simply is not the same as someone who uses this service on a daily basis. Moreover, public transit has become exponentially more important to the economic development and vitality within the region since Steve served. Shame on both counties for accepting this situation and continued inside job mentality of lanta.

He occasionally took the bus. He drove to his diocesan job and was never a daily user like Steve Schmidt. And before his diocesan position, as a Democratic activist while on the Lanta board he drove County wide because Lanta was even more limited the 80s. You clearly dont know history nor facts nor do u understand the point made. Par for the course.

Steve Schmitt was an advocate for a car-free lifestyle. He occasionally would allow others to drive him but did not like it. Fred Williams was not quite so extreme. He drove, but he also took the bus, also walked, and did these things long before they were fashionable. You like to trash people anonymously. That's par for the course.