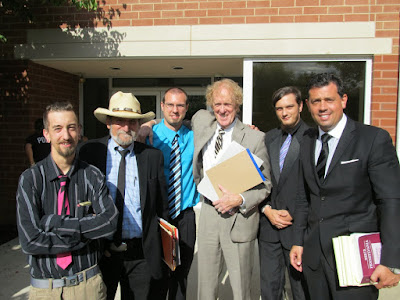 The infamous Sticker Gang has settled its civil rights suit against Nazareth. Filed in the United States District Court, the suit was filed last year by Trevor Gehret, Jeremy Peters and Daniel Logothetis. They were represented by prominent civil rights Attorney Joe Welsh, along with Phil Lauer. Nazareth, Police Chief Thomas Trachta, Patrolman Dan Troxell and the entire Borough Council were named as Defendants. The lawsuit sought compensatory and punitive damages, as well as attorney fees, for civil rights violations, false imprisonment, malicious prosecution, assault, battery and the intentional infliction of emotional address. In addition, the lawsuit sought injunctive relief for constitutional violations. The case was settled today in exchangew for a flat payment of $39,000 and the adoption of three major policy changes in Nazareth.

This lawsuit is the result of tiny "FT (Fire Trachta)" stickers, which were springing up all over Nazareth nearly two years ago, along with the dandelions.

They were small but everywhere. Mailboxes, telephone poles, benches and even crime prevention signs.

The FTs were someone's way of saying FU to Police Chief Thomas Trachta.

After a major investigation conducted by perhaps the dumbest cop on the planet, Chief Trachta served notice that there will be no free speech in Nazareth, a point that Borough Council has tried to make with me on several occasions.

Not only did Trachta arrest the trio that ultimately became known as The Sticker Gang, but he conducted a staged perp parade in front of a fawning press.

He detained these desperadoes until both papers arrived. Then he paraded them outside, up from the police station to District Judge John Capobianco's courtroom. They were shackled and handcuffed, so the dailies could snap pictures of these evil criminals doing what is called a "perp" walk. The Morning Call video shows Jeremy Peters getting at least one shove by a cop who wants him to move faster.

It was actually more of a parade, along the entire length of the bank building. It was done to publicly humiliate this trio and impress a powerful image of guilt in the mind of the public. People charged with littering were treated as though they had just attempted to assassinate the President.

It was also totally unnecessary. Trachta could have easily escorted them up the stairway from the police station into the courtroom.

Online comments in both newspapers expressed outrage at this abuse of police power. Chief Trachta has been called a megalomaniac, egotistical maniac, Nazi, moron, transplanted clown, Barney Fife and out-of-control.

The Sticker Gang was represented by a legal Dream Team of three of the area's most prominent criminal defense attorneys - Phil Lauer, Gary Asteak and Mark Minotti. When they arrived at the courthouse, they introduced themselves to Trachta and tried to shake his hand. He refused. "That's the first time that ever happened to me," noted a baffled Lauer, who has devoted a career to major criminal cases on the federal and state level and is well-respected by law enforcement.

As the case developed, there was no real evidence that any of the Sticker Gang members had actually done the dirty deed. But there was evidence that, in addition to manufacturing a victim, Trachta and Troxell tried to get the feds involved. Troxell actually testified that he contacted the United States Attorney's Office for the stickers found on mailboxes, bringing some chuckles from the defense team. Postal Inspectors apparently have better things to do.

The Sticker Gang had been facing misdemeanor criminal mischief charges (eight counts each), as well as disorderly conduct, harassment and eight counts of scattering rubbish.

"There's nothing here to support the misdemeanor charge," concluded Judge Jacqueline Taschner. "Nothing." She indicated all the evidence from the Commonwealth showed an expression of political belief, not an intent to damage any property.

She then told Chief Trachta that he, like she, is a public figure who has to expect some criticism.

"Suck it up, cupcake!" she advised.

She also tossed the harassment and disorderly conduct charges for much the same reason. That pesky First Amendment kept getting in the way. Mark Minotti, legal scholar for the Dream Team, furnished the judge with another Superior Court decision finding that a person wearing a "Fuck You" T-shirt inside a courtroom is not disorderly, as a matter of law. He noted that disorderly conduct charges cannot be used as a dragnet for all irritations. It is a statute intended to preserve the public peace.

Troxell made a last-ditch effort to get the judge to at least buy a scattering rubbish charge. But he failed there, too. He said he found some stickers in a Valero gas station parking lot, but conceded to Attorney Lauer that he was unable to say how they got there or whether the Sticker Gang was even responsible.

The settlement of $39,000 includes attorney fees, so monetarily, this is a good deal for Nazareth. But Attorney Joe Welsh told me his clients were more concerned with policy changes that would prevent this from happening again.

The three policy changes can be summarized as follows:

1) Free Speech. - Nazareth police will respect citizens’ rights to free speech, including speech with which an individual police officer disagrees or even finds offensive. Officers will exercise discretion in making arrests that might raise questions of free speech, and when possible, will consult with an online supervisor, the on-duty Assistant District Attorney or borough solicitor.

2) Publicizing arrests. - This will be a function of the departmental head law enforcement executive, in consultation, where necessary, with the Borough Solicitor. Blotter information (name, unit block of residence and charges) regarding all individuals arrested for misdemeanors and felonies will be provided to local media for publication unless doping so would identify a sexual assault or domestic violence victim, or would compromise an investigation or prosecution. In announcing arrests, there will be no personal asides

3) Perp walks. - The practice of parading criminal defendants before a fawning media will stop. While they have the absolute right to film and/or photograph prisoners during transport between facilities, Nazareth is under no obligation to create such opportunities and, as a policy, will refrain from doing so.

Updated 8:55 pm. Trevor Gehret's Statement: "Thank you all who supported #StickerGate. Bernie O'Hare thank you for making this a big deal in Nazareth and brining the real issues to life. This journey is over but let's not forget the importance of #StickerGate our judiciary system (cupcake calling and all) and of course a well structured United States Constitution.

"Thank you to all who stood by us in this journey and believing in our cause our friends, family, loved ones and co-workers. A special thank you to our "Dream Team" of attorneys for their hard work and dedication. Today marks the official end to a long battle. Policies were changed to better Nazareth and push it further in to the future. I will see you all in 2020 as I make a run for POTUS.

Victory Party at the 7-11. Weed and cigarettes for all. Please bring your food stamps for food.

The only people that didn't see the stupidity of it all were those you mention from Nazareth government and the crazy one from West Easton.

Now that is funny. Do clean, working tax paying homeowners of Nazareth also get to make a statement?

That would not include you.

Randi Miller, Cupcake Trachta, Bullboy Troxell (where are r now), Carl "I steal" Strye, Larry "Shupundy" Stoudt and the rest of the Nazareth Government idiots should be made to publicly apologize and leave town forever. You dopes shammed our town and cost us a lot of money because of your egos!!!

They should have demanded the resignation of all involved and Borough Council who supported the Borough's actions.

That is one REALLY fu****d up town that you live in, Bernie. When you drive through, visit a few stores - at first glance it comes across as a nice place. But in some ways, it's a damned cesspool. All one needs to do to see this is visit a council meeting.

So this Gehret guy wants to run for POTUS?

Crazy Mezz should try for County Council, maybe she can get the County Republicans to vote for her because she knows how to carry a banner in a parade.

They got enough money to pay the lawyers and the so-called "new" conditions are things they said they would do and are actually no conditions at all but more like suggestions and re-statements of what is already done. Sadly, this nuisance suit had to be settled. The Chief was trying to teach ner do wells a lesson in life. The snowflakes were upset and this is how it goes in todays America.
Unfortunately it is another case of the takers who screw up, wasting the time and money of the makers. There was a time Nazareth was a beautiful little town. Now we have out share of riff-raff.

Fortunately we don't have Constable cRaZy, aka Tricia Mezzacappa, who posted again at 3:25

@3:25 The only "takers" who screwed up in this case, Trish, were Trachta and that bozo deputy dog of his, when they violated the rights of these citizens. It is "today's America," Trish - have you not obtained a spell checker after all this time? The weather is turning cooler again - put some yummy vegan hot cocoa on your mother's stove (See how that works? It's the possessive case, Trish - basic English) and fold in 6 oz of vodka to it.

I am curious, I know people who think this case was silly and these guys were goofs who got caught by other goofs. Why do you assume every post you object to comes from this meazza woman?

I want to be quick to point out this funny observation. Those who drag our names in the dirt are posting as anonymous people. Cowardice is real network bullies.

Also I'd like to say thank you Bernie for following our case and keeping people in the loop. I would have left a comment with the press but contrary to popular belief...I was working both my jobs to support my family. Not hanging out at Seven Eleven. Dullards.

It was my pleasure and honor to get to know you

@7:16PM You aren't curious. You're trolling. Nobody is buying today.

Does this Chief get the blue line painted in the street too?