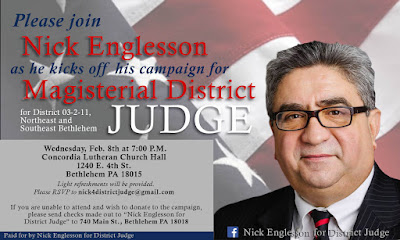 Bethlehem Attorney Nick Englesson, a Bethlehem native and life-long resident, is expected to kick off his campaign for magisterial district judge on Wednesday, 7 pm, at Concordia Lutheran Church Hall on 1240 E 4th St, Bethlehem. Nick will be running for the magisterial position once held by Liz Romig, and more recently, her daughter, Patricia Romig-Passaro. The office is currently vacant. The district includes parts of northeast Bethlehem, southeast Bethlehem and Freemansburg.

Nick is a graduate of Franklin and Marshall College and the University of Pittsburgh Law School. He has practiced law for 38 years and was selected by the courts to serve as a Judicial Special Master eight years ago. He heard and made recommendations in child custody disputes as well as juvenile dependency and delinquency matters. "As a Special Master, I have run my own courtroom on a weekly basis and want to serve as a judge on a full-time basis here in my own community,” he has said. He has resigned his position as Special Master to run for this judicial seat.

Englesson also served as an Assistant District Attorney for 17 years, handling all kinds of cases, from drunk driving to homicide.

He has run for magistrate twice before, in 2001 and 2005, in West Bethlehem. He hopes todobetter runningin the district where he grew up.

He also served as a Lehigh County Commissioner for four years, but never took himself seriously. When he was running for Commissioner, he once handed me a card that said, "Nick Englesson for Commissioner, You could do worse." He thinks lightly of himself and deeply of others.

“I come from humble beginnings. My family ran a diner and grocery store on the South Side when I was a kid. I grew up in a working class neighborhood, in an ethnic family. My district is comprised of people from all walks of life and I look forward to serving them as their District Judge,” said Englesson.

Nick is opposed by another outstanding candidate, Jon Whittingson, a constable who is Patricia Romig-Passaaro's husband.

A third candidate, distinguished police officer Fred Lahovsky, is also considering his options.
Posted by Bernie O'Hare at 2/07/2017 12:00:00 AM

From my experiences with him, Nick Englesson has a good temperament for a district judge.

Very well qualified. I think he'll win it. My only meeting with him was at a real estate closing 12+ years ago, but even then his professionalism impressed me.

What is an ethnic family?

Lahovsky for judge? Only if there is a way for him to sue someone.

Haters will be haters. Instead of seeking appropriate relief should we forget about the courts and take up terrorism?

Isn't there an age limit? How old is this guy?

Agree with anon 120:17, you lost my vote with the entire "ethnic" thing. Stop milking that old chestnut. You are a successful attorney, please enough with the term "ethic".

@ 3:21 Nick's not as old as you might think. And the voters just voted to raise the mandatory retirement age of judges from age 70 to age 75. A magisterial judge term is 6 years so he can probably serve at least two terms.

Seriously who the hell would vote for Whittington?...was he actually referred to as an outstanding candidate.

@ 9:51. Everyone in the Lehigh valley is "ethnic", whether it be polish descent, irish, from one of the old soviet republics, etc. He's basically saying he didn't grow up with a silver spoon in his mouth as his folks worked hard to make a living in this great Lehigh Valley and he has learned how to be intolerant. I take it his parents didn't come over on the Mayflower and you take offense. Is he an honest and fair man? Yes.

@ 4:52. Everyone in the Lehigh valley is "ethnic", whether it be polish descent, irish, from one of the old soviet republics, etc. He's basically saying he didn't grow up with a silver spoon in his mouth as his folks worked hard to make a living in this great Lehigh Valley and he has learned how to be intolerant. I take it his parents didn't come over on the Mayflower and you take offense. Is he an honest and fair man? Yes. (SORRY, 9:51, wrong target)

He has a beautiful mansion on the west side of Bethlehem. That he has lived in for over 20 years and his own practice on Main Street. He ran for judge twice and lost where his mansion is in West Bethlehem. Now he is living in a family home in this district to run over here. I think he will have a tough job trying to win. Whittington is very respected and liked in Bethlehem. I think this will be the third strike for Nick.

Nick is more than qualified for this Judgeship; he's compassionate and intelligent and the community would be fortunate to have him as their Judge.

You have my vote Nick, why would anybody vote for a guy that's never lived in Bethlehem or the Lehigh valley for that fact, whittington is a registered republican and from Lancaster county...people know that? Constable isn't qualified for a judgeship, Liz romig is and always will be qualified, not that joker!

First, he has lived with his wife Patricia Romig-Passaro here in the community and serving this community directly in the District Courts for 5 years. Secondly, as a Judge you are to remain impartial so are you saying Nick doesn't like Republicans? Whittington is married into a family of Democrats. Judges run on both tickets and do not apply their personal views in the courtroom. Thirdly, I believe Whittington has lived here longer recently then Nick. Nick moved in just before the general election to run for this position to qualify. He doesn't even own that home he sold it in June 2016.Fourth, he ran in his district where he owns a home on West Market Street for the same position and lost twice. So where is he going to move next to run. He hasn't lived here in this district for 20 years and he resigned from an appointed position AKA master not Judge because he had to. However, his sister has the last name Baratta. I wonder how you got that appointment? Lastly, maybe do a poll in the state of PA and see how many constables have been successful Magisterial District Judges. You may be surprised. You have my vote Jon Whittington. I don't want someone I cannot trust and tries to make the public believe different.

First I'd like to say you are discriminating against Republicans. That's the kind of Judge we want? Judges are suppose to be impartial. Whittington married into a hard core Democratic family so I guess he won't be discriminating. Secondly, you are wrong about Jon's whittinton's address. He is married to Patricia Romig-Passaro and lives with her and held the office for 9 years. Unlike Nick who moved into a house that he does not own but moved in days before the cutoff to make the residency requirements. He owns a home on West Market Street and ran for the same office there and failed two times. So if he doesn't succeed here does he move to another community and claim himself residency just to run for a position? Thirdly, if you do your homework again you will know that in the state of PA there are many constables who are successful Magisterial District Judges. You presented a lot of discrimination against many people and by the way Liz Romig married them and wouldn't have done that unless she felt he was a man with integrity, knowledge, respectful, dedicated and an excellent role model for her grandchildren. Liz was no joke and was straight forward and honest and I'm sure by putting her son inlaw down isn't earning any votes for Nick. Liz Romig and her daughter had integrity, were neutral, dedicated and treated people fairly. Unfortunately, her daughter became ill with dementia after brain surgery and that also shows he must have patience and compassion for people with disabilities. You have never met Jon Whittington obviously. Also, Nick was a prosecutor so how do you think he can possibly be neutral. He also was an appointed master who is basically a negotiator and a part time worker that works 1 week a month for $40,000 a year off our tax dollars. He was never a Judge. Ironically his sister is married to a Baratta. Who did appoint you Nick? Jon made $70,000 a year prior to serving here as a Constable 5 years ago. He sure didn't move here for money cause he only made 9,000 his first year. I believe that alone shows the man is honest and truly liked the community and now donates his time to helping others. JON WHITTINGTON HAS MY vote! I wish you the best Jon. You are the perfect candidate for this job.