Congrats to Dennis Pearson on His Wedding 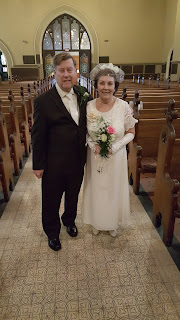 Dennis is running for Comm's in District Three, where Rev. David Jones has ruled the roost through two terms. But David is now running for Allentown Mayor, and apparently has decided against running for two offices simultaneously. Very classy on his part.

Another District 3 candidate is former Bethlehem School Director Basilio Bonilla. He has no job, no experience and was divisive and unprepared during his tenure in Bethlehem. In contrast to Bonilla,, you'll never find a better prepared person that Dennis. I'd love to see the public recognize all the efforts he has made on their behalf over decades.  He's a Democrat with a nonpartisan view of local government. Just don't ask him a question unless you have three hours to listen to his answer.

Dennis really is a very good guy. As a wedding present, The Morning Call's Bill White should remove him from his Hall of Fame.

I sent a cub reporter to cover this ceremony. Churches are off limits to me unless I've been to confession. recently. I've already had enough thunderbolts going up my ass. Unfortunately, only one priest is willing to hear my confession, Father Alex. But after the last time, he had himself transferred hundreds of miles away and is not answering his phone.
Posted by Bernie O'Hare at 2/13/2017 12:00:00 AM

Was their reception at the Lehigh Valley Spaceport?

good for them, a lid for every pot

Any reason Bonilla is still using business cards that have him listed as a BASD School Board Member? I'd say this is false advertising.