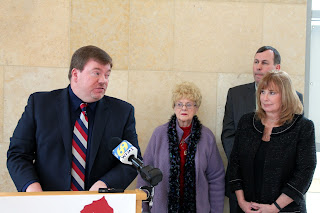 Lamont McClure, who announced his candidacy for NorCo Exec last month, has filed a year-end report showing a campaign treasury of just $3,374.78 as well as $4,500 in debt. But McClure had a fundraiser last week and tells me he's raised $37,000 this far in this race. He plans to have $50,000 on hand by march, and appears to be on track.

Incumbent Executive John Brown, who is expected to seek re-election, is starting the year $35,980 in debt and with just $670.20 cash on hand. Maybe he should ask McClure for a loan.

It is unclear whether all five at-large Council members will seek re-election.

Mat Benol has told me he's undecided. He closed out his campaign account in 2014. Seth Vaughn, who told me he's running and will win, has no money. Peg Ferraro who will likely be the top vote getter, has $193.90 Glenn Geissinger is tapped, too. His account shows him with just $308.60.

I have hard all kinds of crazy stories about Democratic Council candidates. I am pretty sure Lori Vargo Heffner is running because she was at last night's Council meeting. She has no money.

On Monday, I'll tell you about campaign finance reports filed by Allentown Mayor Edwin "Fed Ed" Pawlowski,  Easton Mayor Sal Panto and Bethlehem Mayor Bob Donchez. I am a fairly severe Panto critic, but was impressed by his report. I am a Donchez supporter,but am disappointed again by his heavy reliance on crony capitalists. And Fed Ed proves he's as nontransparent as ever.
Posted by Bernie O'Hare at 2/03/2017 12:29:00 AM

Are any of the Democrats that ran four years ago planning on running this time?

donchez has been a phony for a long time

I guess all the useless republican incumbents don't need money to get re-elected. Hopefully, this is a fatal mistake by all!

Looks like this proves once and for all that Dems are the party of big money.

this is going to be a great year for the democratic party. as the Donald keeps writing executive orders, and his ratings keep plummeting, people are looking to local political offices and finally recognizing what it is they elected in for the past few cycles. a change is coming and if i was an elected R i think i would sit this one out. nothing like another Loss in the W L ledger of your political career.

and if your looking at the county races you have to remember that the conservative Rs were the ones (including Peg) that voted for a tax increase and the county executive did not Veto it, remember they did not have the votes to override the veto and it would have stuck but the executive kept the windfall, and due to our short memory, claims he saved the county money due to his business acumen, and not his tax increase.

also if you look at this years budget voted in by all members, they deficit spent again by a bigger margin than stoffa did every year

Dream on 8:07. Much like your marchers these rants do not turn into votes. Predict another county Republican sweep. Not even close. With McClure with his record at the top of the ticket, it is a big time loss.

That would go about as well as Trumpster. One crazy narcissist at a time please.