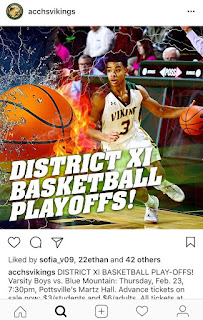 I was hoping that Central and Bangor would finally meet on Thursday night in the District Championship,and even had a bet set with a Bangor fan I won't mention. But our bet will have to wait until next year.

They say that the door to a District XI championship is through Pottsville, and the Crimson Tide proved it with a 48-35 victory over the stunned Bangor Slaters.

The battle between Central and  ESN was much closer. Though most high school teams are run 'n gun, this was a defensive battle. Central won the first half by three. But they lost the game to the Timberwolves 41-39, and in the closing seconds. Central's Dat Lambert had the ball with seven seconds left on the clock. He's a three-point shooter. He's a jump-shooter. But he elected to drive for the hole and as he made his way into the paint, tripped and fell. ESN grabbed the ball and tossed it to the opposite side of the court and the buzzer sounded.

Tomorrow night, four 6A semifinalists will play at PPL Center in downtown Allentown. The 6 pm game will feature Pocono Mountain West against Emmays. In the 8 pm contest, William Allen will take on Parkland.

As a Central fan, I am sorry to see their season end. But they'll be back next year.

"Life is falling down seven times and getting up eight." - Miyamoto Musashi

Tough break for Central. Hope Dat wasn't too hard on himself. Maybe the intent was for him to draw a foul. But they had a nice season and will be back stronger next year.

But could've been the intent because Dat has a high percentage at the foul line.

One of the sloppiest, most exciting games of the year. Central is young and tough, though. They'll be back. Dat getting any college attention? He's a solid player.

That first game at 6:00 will actually feature Emmaus vs. PM West. I'm heading down to PPL Center for this really great double header tomorrow. Might be as many as 6 Division 1 athletes, including my local favorite player Sam Iorio. Allen and Parkland sure know each other well, should be exciting.

A lot to learn from such a loss. Gotta be bit hard on the kid, but he will come out stronger for it. Keep ya head up....

9:10, These are kids. If you want to personally attack one of them, and it's some young man who has not even been specifically mentioned, and you don't even sign your name, you are a piece of shit.

6:09, So far as I know, Dat is getting no or little attention from colleges. His aunt wants him to go to school near her.

7:59, How could i forget Emmaus? I corrected my post. Thanks.

That's what I said.

How has the officiating been?

I feel sorry for those guys in stripes. They are reviled from the beginning until the end of the game. I think personally that officiating has been very good. Yes, they make mistakes, but it balances out in the end.

Dat should check out DeSales. Solid program that's always in the mix. Good school. Close to home. He's better than D3 though. I think he'll have options. He's exciting to watch and has a little swagger. He's fearless. Hustles. Good stuff Bernie.

He is a true samurai. I know the loss was tough for him.