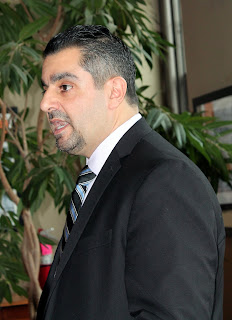 Easton City Council member Peter Melan announced his candidacy for NorCo Council on Friday afternoon at the Grand Eastonian, in the company of his friends, family and supporters. Luminaries like State Rep. Bob Freeman and State Rep. emeritus Rich Grucela were on hand, along  with Mayor Sal Panto and fellow Council member Sandra Vulcano. But the stars of the show were his son and daughter, whose smiles lit the dark room.

His daughter Sophie gave him a big hug when he was done. She was confused by the fat man in the strange hat wondering how such a cute little girl could have such an ugly Dad. Peter explained I was teasing. Then she smiled again. .

Melan had to use the Grand Eastonian to make his announcement because the County refused to allow him to announce at the courthouse, the people's building.

Melan, a Moravian College graduate, is the President of VeraTrack, which verifies employment histories for human resources professionals. Before branching out on his own, he was a database analyst with United HealthCare, Lehigh Valley Health Network and Synectics Group. He has also been a certified EMT for over 20 years. Before being elected to Easton City Council, he served on the police civil service and zoning hearing boards.

He made it a point to note that his attendance record at City Council and committee hearings is 100%. That's in stark contrast to NorCo Council member Glenn Geissinger. He attended a scant 54% of the meetings last year because he was busy running for Congress, a race he lost in the primary. It's also a lot better than Seth Vaughn's failing 66% record, which included the Budget hearing in which Council members proposed amendments. "So what?" said Seth Vaughn (in the presence of witnesses) when confronted about his pitiful record.

Why is he running? He gave four reasons: 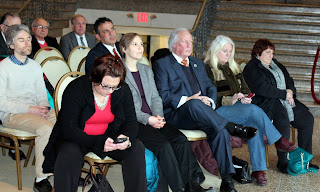 1) Executive John Brown. - Echoing  remarks that Lamont McClure made in his Executive announcement, Melan noted that "a dark cloud has shrouded the Executive since his first official day three years ago." He pointed to Brown's "lack of transparency and acting callously to award contracts to benefit political allies." He noted an  "abysmal employee morale" and slammed Brown for "reckless and careless" decisions like payhikes to Cathy Allen without authority from Council. He slammed Brown's "fundamental disregard" for county workers, in which he purposely left positions in the row offices and at the jail vacant so he could "present a false sense of fiscal responsibility."

2. Gracedale. -  The county-owned nursing home is operating at a profit for now, but he asks why anyone would oppose a nonprofit foundation that would receive tax-deductible donations to support Gracedale. He also notes that Medicare has rated "quality measures at Gracedale as "much below average," mostly because of the high percentage of short-stay residents who are ginned up with antipsychotic medication, but who still  report moderate to severe pain. "We should not only focus on revenue and expenses but want families to place their loved ones in a safe and comforting environment and maintain a home away from home feeling," he said.

Human Services Chair Seth Vaughn has never bothered to address why Gracedale is rated "much below average" in quality measures.

3. Civil War Era Jail. - "Our prison is in severe disrepair and a plan of relocating it to a viable location is a pipe dream for this administration. The Department of Corrections should not be treated as patsies and placed in harm'sway due to a debilitated facility, lack of vision and inept leadership by the Administration. Constructing a modern prison not only improves operational efficiency but also creates a safer working environment for all.  ... Let's provide a viable solution to those who oppose the concept of moving the prison and allow these citizens to make an informed decision,something we do not see with this Administration, who clearly have no creativity in solving problems."

4. Where are the Jobs? - "There is no economic development plan; considering Easton and Bethlehem are attracting major corporations and attractions on their own with very little or no assistance from the current Administration. It should aslo give everyone in our county a great deal of anxiety when a lawsuit is filed by the casinos that ultimately turned over the mandated host fee, which is a major contributor to the local municipalities. The county's only response was by NorCo District Attorney John Morganelli ... ." He said that the refusal of Brown and NorCo Council to speak out is "troubling and cowardly," but is what to expect from a group "who seem to shy away from any fight and will not get their hands dirty."

Melan is seeking the Democratic nomination to one of five at-large seats that are up this year. Three other Democrats are mulling over the nomination. Lori Vargo Heffner, a licensed professional counsel, has run once before. Dr. Muhamad Aly Rifai is a well-respected psychiatrist and internist.who discovered a link between hepatitis C and psychiatric disorders.

Peter is a member of the Easton area's proud Lebanese community. They are the people who make this community great, and many have been here for generations. Yet yesterday, a supposed tea party sympathizer calling herself "Yosemite Samantha" claimed that downtown Easton and Allentown are "two cities once controlled by Anglo-Saxon land owners currently they are in large part owned by Syrians, Lebanese, and other Middle Easterners who may still have connections to ISIS and other bad actors in the area."

Though this statement is so outrageous I have to wonder if it is a plant, it's still cause for concern in this divided country. Anyone of Lebanese heritage needs to think long and hard before voting for the Republicans on Council, most of whom have allied themselves with so-called President Trump.

What the Republicans on Council  are doing is unclear. That's just the way they like it. It's what to expect from a body that won't release its official email addresses to the public. It's what to expect from an Administration that modified the county website to make it less transparent than it was before, and to advertise Lehigh County businesses.
Posted by Bernie O'Hare at 2/06/2017 12:00:00 AM

It is unclear as to why he could not announce his run in the courthouse rotunda. McClure announced there, why was this man not allowed to announce there? What is the procedure for getting permission?

Despite the anti-Trtump rhetoric spewed by the author, I'll still vote for this gentleman. He seems to be an honest, educated man who wants to see good government in action; not the trash that is running it now.

Did he support Sal's regressive extra income tax on the County workforce in Easton?

Peter is what the Democratic Party needs and what Northampton County needs good honest, thoughtful, intelligent leadership from a new face. He would have been a good choice for executive

2:07, I told Peter I would not ask. I doubt McClure did. It is the people's building. There is no way you can bar political activity in the hallways and rotunda, although you can inside the government offices. Brown engaged in political activity inside his office in his first weekon the job,as emails from Kim Plyler make clear.

7:34, So far as I know, Peter was not on Council when the commuter tax was first adopted. Nor was he on when it was increased/

6:36, If opposition to bigots makes me anti-Trump, call me anti-Trump. The simple truth is that someone calling herself "Yosemite Samantha" made some vicious remarks against Easton's Lebanese community, many of whom were themselves Trump supporters. This hatred for them, simply because of their ethnicity, is something every Lebanese should know.

9:01, Peter has lots of ideas, and I believe he will make an excellent Exec.

We have had lots of talk and more talk. What has his record on city council been? How does he feel about the Panto regime?

His record has been one of hard work and attention to detail. He and Panto are friendly, but he has stood on his own two feet and has bucked the mayor twice.

Oh oh, someone has a new mancrush.

Just answered your question while you look for excuses to slam him. Of course, you can always team up with Yosemite Samantha, who tagged the Lebanese and said Easton needs Anglo-Saxon rulers.

Such disrespectful people in audience. Everybody on cell phones. Matt sleeping. What a booster crowd.

Muncy! Wake UP! The party is in shambles..get to work or get out.

Peter an obvious choice and a good one. Step in the right direction. Now..can we find a few more people with brains and common sense to help undo the damage Brown has inflicted on us all? Keep looking and leave no stone..unturned.