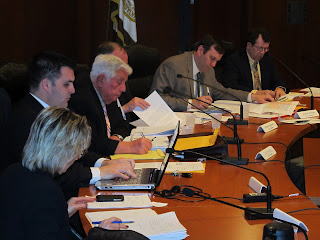 In a one sentence ruling, the Pennsylvania Supreme Court has upheld a Bethlehem Zoning Hearing Board decision allowing Moravian Village to expand its retirement community along Stefko Boulevard in Bethlehem. Developer Abe Atiyeh, who had been trying to market his own assisted living facility at the intersection of Center Street and Dewberry Avenue, lost previous appeals before Northampton County Judge Emil Giordano and the Commonwealth Court. He has also given up on the idea of an assisted living center at Dewberry and Center, and is now proposing a psychiatric hospital at that site. On August 19, Bethlehem Planners nixed that idea.
Posted by Bernie O'Hare at 9/16/2011 11:17:00 AM

I'm not really sure what the hell you were saying, but will not tolerate anti-Semitic remarks.

For all the skeptics out there see, the system does work.

What a waste of taxpayer monies.

Nashville in the Northern Tier

"will not tolerate anti-Semitic remarks"

what's your position on anti-Semantic remarks?

Why was the first comment deleted. I know because of the political donation that sway boards in the direction of the publics opinions.

The first comment was deleted, not bc of the substance of what was said, but bc it contained an anti-Semitic phrase. I have a zero tolerance policy for statements or phrases I consider anti-Semitic.

You must remember that O'Hare thinks "low hanging fruit", is a homo-phobic remark.

I see. Any criticism of Angle for past racist and anti-semitic remarks gets deleted even if you yourself are the author of the criticism.

Yes, this blog is your toy and like Pravda you only print the "truth". Would Angle approve of your socialist, nee communist tactics??

The comment deleted had nothing to do with Angle.

There was no question that the comment deleted contained an anti-Semitic term.