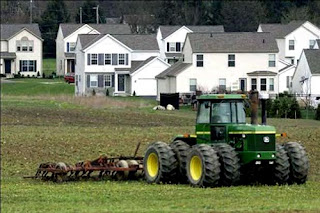 As reported in today's Morning Call, Lehigh County Judge Michele Varricchio has invalidated a Lower Macungie Township zoning ordinance change that would have allowed mega-gazillionaire (and turkey farmer) Dave Jaindl to develop 600 acres of farmland with warehouses and homes.

Before adopting this ordinance, the Township had entered into a written agreement with Jaindl, agreeing to change their zoning just for him, leading attorney Don Miles to charge that this was unlawful "contract zoning." In addition, he argued that the Township failed to amend its comprehensive plan at the time it adopted the ordinance, which is another No No.

But Judge Varricchio did not have to consider those questions because the way the ordinance was advertised made it unlawful. She concluded the advertisement was "misleading" because, among other things, the location of the lands being re-zoned was omitted. She did acknowledge that a "good faith effort" was made by Township officials, but it fell short.

I think Jaidl uses CaseIH. Your photo is wrong:-)
nlv

she thinks my tractor's sexy.

It really turns her on