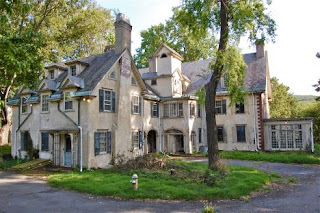 It's not often that an elected official will bash a person who donates $2 million and a 55-acre tract to his own township. But that's exactly what Bethlehem Township Commissioner Michael Hudak did during a Septemebr 22 meeting to discuss Housenick Park. Here's the story.

When Archibald Johnston, Bethlehem's first Mayor and one-time President of Bethlehem Steel retired in 1927, it was to what he called "Camel's Hump," a large tract along the Monocacy Creek. It included a three-story mansion that the engineer designed and built himself. He spent his last twenty years calling himself a "farmer," but still had The New York Times delivered daily from the open cockpit of an airplane.

Johnston's granddaughter, Janet Housenick, would later convey 36 acres of Camel's Hump to Northampton County as the Archibald Johnston Conservation area. In her Will, she devised another 55 acres, including the mansion, to Bethlehem Township as a park. She also set aside $2 million for the Township to maintain the property.

"She knew what was going on," he complained. "She let it fall into decay. Why didn't she have somebody fix the ceiling? It was never kept up over the years."

One Township resident, Christine Murray, quietly answered, "Did she not leave $2 million to the Township? Is that not something?"

Dr. John Yaswinski, a local veterinarian who grew up in the area and still lives there, has no doubt about the potential of this park and mansion. "People are going to come here," he said, adding that "it would be a real crime not to seize this opportunity." Dr. Yaswinski stated that the park and mansion could actually generate income for the Township from wedding rentals. Other ideas floated included chamber concerts at the mansion, as well as a bed and breakfast.

The Master Plan will be presented to Commissioners on October 3. It is estimated that improvements to the park, phased in over the next ten years, will cost around $1.7 million. Costs for restoration of the mansion will depend on which of several options is approved by Commissioners, but the cost of keeping it in place is estimated at $71,000.

During the meeting, Stone stressed that no Township funds will be expended for these improvements. Costs will be paid by the Housenick Estate, and Stone indicated that the property might be eligible for DCNR and RACP grants.

In addition to money, some of the improvements will be the work of volunteers. Vicky Bastidas, a member of the Housenick Committee, Produced a letter from Brain Williams, Executive Director of the Bethlehem Area Vo-Tech, who called the park "a great opportunity to create a living classroom for many of our programs. We can provide student labor to offset the costs of the project." She also mentioned a similar offer from Northampton Community College.

When Stone recommends a final plan to Commissioners on October 3, it will include a recommendation that this Committee be "actively involved" in the proposed development of a tract right next to the park. Developer Michael Perrucci has proposed a 420-unit apartment complex at that location, even though it is in a conservation district and in an area zoned "rural residential." His plan would require both rezoning and changes to the Township's Comprehensive Plan.

Hudak, an advocate of this development, objected to this recommendation. "What would be the advantage of that?" he asked. "The park committee does not really need to be involved in zoning issues."

But Township resident Christine Murray disagreed. "I'm really sad that there's going to be 420 apartments there. The quality of this park is really going to go down." She referred to the area as a "magical little spot. We really should protect it."

Hudak attempted to discourage comments about the proposed Perrucci development, calling it a "township issue." But Township resident Barry Roth, a recent appointee to the Planning Commission, continued the discussion. "If you want to see what it will look like, go to the Township Park and see the houses ringing around it. You need to come to meetings."

That sentiment was echoed by Commissioner Tom Nolan, who claims he "was hooked" on Housenick park after one visit. He called it a "hidden jewel," and urged people to make themselves heard.

"It is important for people who have an opinion, for or against, to come and express that opinion."

After the meeting was over, Commissioner Hudak continued complaining about Housenick. "She lived 100 yards from that house and never spent a dime," he stated. He's also upset that members of the Housenick committee like Vicky Bastidas, who has offered student labor, are not Township residents. He stated that, instead of the mansion, he "prefers to concentrate on the grounds."

And isn't Marty Zawarski building in the buffer zone? You know, much needed developement, I think he calls it,

"The Polluted Rainwater Runoff Into The Monocacy Estates"

You realize that is pristine trout reproduction area, and it harbors a population of rare trout.

I don't know who in there right mind would even want to live so close to 22.

Bernie
Thanks for continuing to write about these meetings and unfortunately some government types stupid thoughts. On another topic,
did you happen to hear what a certain local live radio personality said the other day about a local top banana who travels to Harrisburg on a regular basis?

Bernie
Your readers need to glance at
Lower Saucon/Hellertown Patch for a reporter's article on what's going on with one state agency that apparently thinks it answers to no one.

A beautiful historic building such as this can be put to many diverse public uses. We are far too quick to bulldoze our old buildings and replace them with nondescript glass front boxes. We are losing our sense of history and individuality.

"did you happen to hear what a certain local live radio personality said the other day about a local top banana who travels to Harrisburg on a regular basis?"

Nope. Fill us in.

He must have fallen off roof's one too many times!

Hudak denies that his comments were intended to trash this benefactor. He merely thinks that more attention should be paid to the grounds. Whatever his intentions, he bashed her.

If you travel south on 191 from Rte 22, there is a road on the right - Christian Spring Rd - below the Walmart and across the street from the strip mall. Turn into that and you're there.