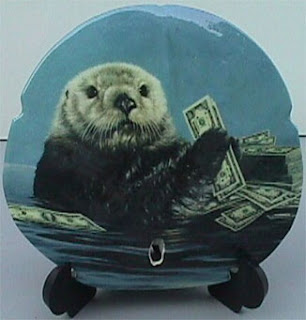 As I've told you weeks ago, Gracedale Initiative lawyer Larry Otter has appealed Judge Baratta's denial of a motion for attorney fees aimed at Northampton County Councilman Ron Angle and yours truly. Angle and I, you may remember, challenged that initiative in court. Although we were able to invalidate many signatures, we were unable to invalidate enough of them to prevent a plebiscite on the sale of the county-owned nursing home.

According to Otter, Angle and I were really just spearbearers for Eckert Seamans, the law firm charged by County Council resolution with the responsibility of expediting Gracedale's sale. Otter goes on to claim that, at the same time that Eckert Seamans was secretly representing us, we were secretly representing the County. To spice things up, he occasionally mentions Bonusgate and "unnamed co-conspirators."

Judge Baratta chucked Otter out of Court. The Otter appealed.

Yesterday, he filed a statement to explain why he is appealing. Now he's braying about "criminal acts" by the County Executive, and Angle and I are for some reason responsible. To cinch it, he points out that I am a "disbarred attorney." Obviously, I'm a bad man.

Now with as much as he knows, you'd think the Otter could follow the rules of appellate and civil procedure. Those rules require that, when he files a motion or other document, he must serve the other side. Either in person or by mail. The Otter is very lax about that little requirement.

I've repeatedly reminded him that he has to serve me by mail. Other attorneys have reminded him, too. I want hard copies of any documents accusing me of illegal activity. I'm funny that way.

Yesterday, I told Otter that unless he serves me in accordance with the rules, I'll ask the Commonwealth Court to dismiss his appeal. Here's what he sent back.

I doubt I'll receive the hard copy I requested. Neither will Angle. But I'm sure the Commonwealth Court will be delighted to read Otter's remarks.