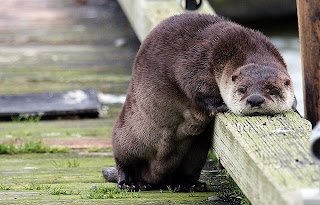 I've never seen this before. Judge Baratta himself is asking the Commonwealth Court to dismiss a Larry Otter appeal. Let me fill you in.

In the never-ending Gracedale saga, Larry Otter recently appealed Judge Baratta's August 30 refusal to reconsider the imposition of attorney fees against Ron Angle and yours truly.

After the appeal was filed, Otter was directed to file what is known as a 1925 statement, in which he explains what's bothering him. He responded with a rambling and repetitive recitation of 11 reasons. But according to Judge Baratta, many of them are "wholly irrelevant."

Baratta originally denied attorney fees in this matter on March 4, 2011 because there simply "was no proof of any conduct that could be considered vexatious, in bad faith or otherwise improper." Otter never appealed that denial, but 52 days later, claimed there was "newly found evidence" of bad faith. He amended that petition in May, and then amended it again in June. Then he withdrew one of them.

Otter's "newly found evidence" is Eckert Seamans, a law firm hired to represent the County in expediting Gracedale's sale. Those lawyers billed the County for reviewing my proposed complaint and their suggestions, which made it a better pleading. According to Otter, this is just like Bonusgate. In fact, he had us going to jail in WFMZ-TV69 interviews. According to Judge Baratta, "[w]e were unable to follow Counsel's analogy."

Judge Baratta concludes that, even if Otter is correct in claiming that the County acted improperly, that has nothing to do with Angle or me. "[W]e found that such evidence is irrelevant to the issue before the Court related to proving vexatious, obdurate, dilatory or bad faith actions or motive on the part of the pro se litigants. We have already ruled that Mr. O'Hare and Mr. Angle raised legitimate and justiciable issues and further presented competent and compelling evidence challenging the legality of thousand signatures. In fact, Mr. O'Hare and Mr. Angle successfully established that thousands of signatures were invalid ... ."

Baratta goes on to say, "We suggest that this appeal be dismissed."

It's rare to see a judge suggest to the Commonwealth Court that an appeal has no merit, but there it is. Undoubtedly, Baratta is signalling these jurists that Otter's appeal, like his numerous motions, is frivolous.

Something tells me they already know.

Updated Friday Afternoon - On another blog, someone who anonymously claims to have read Judge Baratta's opinion makes this accusation: "No where did the Judge say 'DUMP THE APPEAL'. This must be the law by bo. Again half truths and lies."

I quoted Judge Baratta accurately. I'll add that I can find no indication that Otter's appeal has been indexed in Commonwealth Court.
Posted by Bernie O'Hare at 9/29/2011 12:12:00 AM

The only reason for the continuing saga is the dishonesty of you, Angle and Stoffa. The Fed's are checking all this out. It should get interesting.

i can assure you the feds have no interest in this matter.

Otters must eat 15%-20% of their body weight in food each day to survive. Given the size of the otter in question, it is understandable that he requires as much funding as possible to support this requirement.

Can you sue him for fees Bernie? Maybe you need to flip the script on this coward.

I think the time and energy would be wasted, plus judges would likely just want to slap both of us. But I really did not appreciate his attempt to portray me as a criminal on WFMZ, and there may be repercussions for that. That broadcaster allowed itself to be played.

That broadcaster is Bo Koltnow. There is no truth to the rumor that he is Ichabod Crane of Lerch. His reporting skills are extraordinary. That's how you end up on cable access giants like the Cathy Crane Retirement Home Channel. Bo's next professional step up is to get a job in Pea Pick, ID. Same with the weather girl who needs braces.

Att'y Perkins, As always, your insights into the Otter are deeply appreciated .... and funny as hell.

You act like a criminal so it wasn't a major leap in reasoning.

Dear County Rotunda Door,
Please understand that I must rip you off the hinges for and remove your frame, and probably the wall its attached to. I am a big daddy chair that had to be made special for fat ass O'Hare to take the witness stand in the near future. Asses like his dont fit in no regular chairs. I am also plastic, so I can be wiped down as he shits his pants on direct examination .

You must be disabled for several minutes to accommodate me. I am a double wide jail cot to supply the jail cell of fat head who drives that bitchin toyota. He'll be shakin up for awhile, and needs special accomodations.

O'Hare wears a special shirt when he rides his bicycle on his "secret" route. Across the back of the shirt it reads,
"Caution Wide Load"

The previous six comments come from morons who apparently seem to think that personal attacks give them some kind of moral superiority. Of course, what they rally establish is just how crazy and bitter they've become. These are people like Jack D'Alessandro, the Fake Rev, Mary Ann Schmoyer and others who demonstrate just how much they care about the Gracedale residents by their vicious and hateful comments to anyone who says something they do not like.

A judge, the very judge who ruled in their favor on the Gracedale question and with whom I still disagree, has determined ... several times now ... that Otter's motion for att'y fees has no basis in fact or law.

I have never seen a judge suggest that an appeal be dismissed, but Baratta has asked the Commw Court to do just that. It is a frivolous motion, and the only persons who take it seriously are brain dead people like these chuckleheads. I doubt that Otter himself takes it seriously.

You call me fat. Boy, you really got me there. I admit it. Guess what? I can lose weight, but you'll still be stupid.

And by the way, D'Alessandro and Schmoyer could lose a few tons themselves.

Hey O'Hare stop ripping off Churchill. You may have the girth the depression and the alcoholism but not the wit or the brains.

I believe someone else may have said that, but it was not Churchill. The simple truth is that you goons revel in all kinds of personal attacks, even when it is clear to anyone with more than one brain cell that this is a dead issue.

Slowly, the Northampton County electorate is becoming wise to you people.