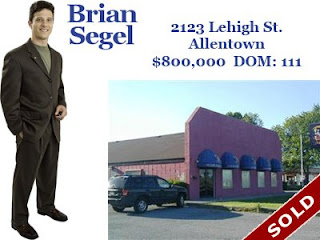 Yesterday, Dennis Pearson was among those in Judge J. Brian Johnson's courtroom in a zoning dispute over the strip club that Platinum Plus purchased from Erv's BYOB. Dennis and other East Side residents are aganst the idea of an expanded "gentleman's" club at the Airport Road Shopping Center, especially since it has a liquor license and intends to stay open past midnight.

After failing to dissuade zoners from granting relief, a Knight in Shining Armor came to Dennis' aid. Bill Malkames, perhaps the Lehigh Valley's best zoning attorney, took on the cause. And he would do this at no cost at all to Dennis or other East Side residents.

But who's paying the legal tab? Attorneys thought it might be Erv himself, especially since he has another strip club in Bath.

Yesterday, everyone found out the truth. Malkames is being paid by Brian Segel, an Allentown realtor who claimed he was doing this for the community.

But testimony revealed that Segel is the Realtor who closed the deal when another strip club, Scarlett's Grand International was sold in June for $800,000. Josh Kessler and a silent business partner from Harrisburg's Savannah's on Hanna, will soon open a new strip club on the Lehigh Street property. Obviously, Platinum Plus would cut into their own platinum.

Malkames provided Judge Johnson with case law stating there is nothing improper about being paid by a third party. But Pearson has a different view. After it was all over, he told me that neither he nor other East Side neighbors would have agreed to this arrangement had they known the facts. He was victimized.

I still think he'd look good doing a pole dance, but he denies that he intends to audition as a Chippendale.

Judge Johnson chided Segel, but the real question he must decide is whether the Platinum Plus expansion is lawful and a new use.
Posted by Bernie O'Hare at 9/15/2011 12:00:00 AM

Best economic stimulus I read all morning, must go relieve my bonner of it's juices...

Bernie
You're kidding! That Lehigh Street property's gonna be another naked lady joint? Right next door to the $10M auto dealership?

In the Midwest these establishments are called Shoe Shows, after the only attire worn by the entertainers, most of whom are working their way through college - or so they say.

These are good, sustainable jobs created by an untethered, free market. These jobs don't require stimulus. They create it!

I say let them operate,the club on Lehigh was not a big problem as far as police calls go.They have their own security.Besides business privalege what other taxes do they generate? Amusment tax? Vending machine tax etc,etc Recall that when they closed down the New Orleans Bar at 7th and Linden it drove all the action to the streets.Stupid move,Circling the block 7to 10,linden to chew.

I now somehow the tax dollars from this project will help finance the arena.

That must get a rise out of Pawlowski.

I won't argue with you on this point. I get to see zoning attorneys and the names you mention are all very good. And I forgot Jim Holzinger.

Bernie, I just wanted to let you know that I asked both Dennis and another appellant if Malkames ever explained to them that the new owners of Erv's had offered at least 5 times to sit down and medaite a solution outside of court. I interviewed one of the Attorney's yesterday and he showed me letters sent by them asking for a meeting, I already had them from one of the appellants, but now i know for sure it was true. I also know that while Malkames sent copies of those letters to all the appellants, he never explained the options explained in those letters to them. In fact, Malkames always contacted Brian Segel , then had Segel contact them. Both Dennis and one other appellant told me separately that Mr Segel directed them to never speak to the new owners.
Which makes me question Attorney Malkames representation of them. If the Appellants truly were the client, why did Segel pull all the strings, and tell them what moves to make?
I know that most lawyers are reluctant to point out misconduct on behalf of other lawyers, but I believe Mr. Malkames should explain just what the hell he was doing

"(f) A lawyer shall not accept compensation for representing a client from one other than the client unless:

(2) there is no interference with the lawyer’s independence of professional judgment or with the client-lawyer relationship; and

(3) information relating to representation of a client is protected as required by Rule 1.6"

I'm inclined to agree that something is wrong here. Malkames had authority stating he could be paid by a third party, but he owes his fidelity to the client, not the person paying him.

In this case, Malkames represented to the Court that his clients were unwilling to sit down and mediate, and apparently, that assertion was inaccurate.

This is a no brainer. George F. Will, Boehner and Cantor would all extol the virtues of laissez faire capitalism and competition.

Let each club present its widgets and see where the public votes with its pocket book.

Gee even Rick Santorum and Senator Toomey would can get behind this one - too much government regulation!!!!

Free these job creators/captains of industry from the shackles of the communist Obama regime!

Charlie Dent, moderate that he is might suggest a compromise and say bottomless is out. Brazilian g string at a minimum.

Take your free enterprise rants out of your pants and go see whats Made in America!!!

Bernie can't even get his facts straight. For anyone who truly knows the people involved in this case Bernie is the only one with a problem.

Hey Bernie, Take a good look at the comments and you'll see that 95% of them support the club on Lehigh St whereas no one is supporting Platinum Plus since it's near too many fine neighborhoods.

Who cares who's funding the appeal? The neighborhood couldn't do it on their own and they will be the true beneficiaries if successful. Why would you want to stop that? Do you dislike the neighborhood that much?

Dennis himself stated that he cares who was funding his appeal, and if he knew it was coming from another strip club, he would have declined. It is sickening to me, to the East side residents who were duped and to the judge who heard the case.

The term “Duped” applies to the previous battle with these residents and “Club Horizon.” Objectors went up against this and were promised it would be safe and secure. There was a 2AM riot at the Wa Wa nearby this location a month or two ago. Police officers were assaulted! No wonder they didn’t want to talk to anyone. Say what you will but to me, it doesn’t matter who is funding this. This is the last stand these residents have to protect their community. There is a reason that large clubs are not …or should not be found close to residential neighborhoods. They bring an element that is dangerous to the families living within them.