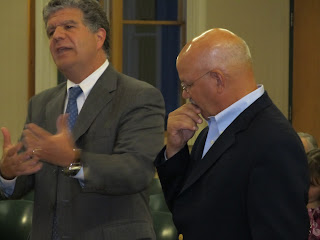 When developer Michael Perrucci appeared before Bethlehem Township Commissioners at their May 16 meeting, he received a chilly reception. He'd like to build a 420-unit luxury apartment complex and commercial buildings in one of the last remaining rural areas of the township. Located right next to Housenick Memorial Park, and close to County-owned park land, Perrucci wants three-story highrises in a conservation area that is zoned rural residential. His plan would require both zoning changes and modifications to a 2004 comprehensive plan.

Perrucci was back before Township Commissioners at their September 19 meeting. Despite the absence of any intervening public meetings concerning this project, three Commissioners suddenly seemed much more receptive than they were in May. Before the night was over, Commissioner Michael Hudak was openly advocated the plans and sparring with the two Commissioners who still had reservations.

Accompanying Perrucci was his General Counsel, Steve Santola, who spoke about other Woodmont developments in the area. He indicated a trend towards apartment living by people who do so as a matter of choice. To prove his point, he stated that 54% of his Bethlehem units have an average household income of $70,000, and 30% have an average household income of $90,000. He spoke of amenities attracting young professionals that include a pool, fitness center and club.

Perrucci told Commissioners he'd install walking paths from his apartment complex to the park, a 55-acre tract off of Christian Spring Road, which includes a mansion that was once home to Bethlehem's first Mayor, Archibald Johnston. The late Janet Johnston Housenick devised the property to the Township.

She also donated an adjoining 36 acres to Northampton County as a conservation area, and concerns over the proposed development brought Northampton County Council member Ron Angle down from the Slate Belt. "I would think this would be a bad move," Angle said. "Your citizens need a place to go, where they can walk along that magnificent creek." Speaking of Janet Johnston Housenick, whose Will gave the Township that land as a "natural area," Angle doubted whether "she was thinking you'd want to change your zoning next door and put in another 400 units."

On May 19, Hudak had told Perrucci that a consensus at Housenick Park meetings was to keep the area "low impact." But on September 19, Hudak stated there were "natural buffers" to shield the park from the apartment complex, and that development is inevitable. His only request was that the buildings have a "rustic look."

Unlike Hudak, Commissioner Jerry Batcha is adamantly opposed to the high-density development. Waiving the Township's 2004 Comprehensive Plan, he noted that the tract is zoned rural residential, which would only allow for limited development. Batcha added that the area is also in a conservation overlay district, which was designed to conserve the quality of Monocacy Creek and protect environmentally sensitive habitats. He added that traffic in that area would present public safety concerns.

"It's almost hypocritical when communities or people say, 'We're going to preserve open space,' until there's money to be made from it by somebody down the road. Is this going to be a conservation district or not?" asked Batcha.

Agreeing with Batcha, Commissioner Thomas Nolan noted there is "great concern" among those planning Housenick Park, and added he still regards a nearby high-density development "very negatively."

Although agreeing with Hudak that development is inevitable, Commissioner Paul Weiss stated he is still a "little bit concerned" about the traffic a 420-unit apartment complex would unleash on Rte 191. "That's a lot of traffic," he said.

President Arthur Murphy, noting that the Moravian Church is the current owner of the land that Perrucci would like to develop, stated they have a "God-given right to do whatever they want with it." Like Hudak and Weiss, Murphy believes the land will eventually be developed anyway.

Tim Brady, a member of the Housenick Advisory Committee, Housenick Estate trustee, member of the Moravian Church and a former Commissioner, suggested that the Township open its comprehensive plan, but require Perrucci to foot the bill. He added that the Deed to the Moravian Church contains no restrictions. But he also noted that seven months before her death, Janet Johnston Housenick opposed an attempt by her sister to have an area of Bethlehem rezoned to permit more dense development.

Commissioners took no action on Perrucci's plan, but three out of five indicated they view it favorably. Perrucci indicated that he would be willing to submit a less dense plan, was looking for a "middle ground," and wants to work with the community.

Photo: Steve Santola explains the advantages of apartment life, as developer Mike Perrucci listens.
Posted by Bernie O'Hare at 9/20/2011 01:35:00 AM

They pave paradise and put up a parking lot.

The conservation district next to this mansion is perhaps one of the last open spaces left in Bethlehem Township. Construction will force wildlife to race on to 191 where they'll be killed. The fresh stream will be polluted as it will be impossible for some building debris and excavation not to spill into it and the traffic which right now is filled with 18-wheelers along that commercial corridor near the Meals on Wheels offices that exits onto 191 will be a nightmare. Why don't any of these "commissioners" address these issues and why aren't hundreds of nature lovers attending these meetings? Thanks for bringing this to our attention.

Isn't there a problem in another area wirh over development. The serveyor, the escovator and the builder all get it mixed up on what has to be done. Than the home owners and municpality have to deal with the miss comunications between these partys with LLC at the ends of there names.

Traditional stereotypes of the mafia

OT comments about "English only" will be deleted.

First of all Mr. Perrucci has done some very nice developments throughout the area. Secondly, who the heck does Angle think he is to even voice an opinion at the meeting? Who is he to tell Beth Twsp what to do. Ron, get a will.

First of all, Perrucci intends to develop the last remaining rural area in Bethlehem Tp. Second, the County happens to own land right by this tract. Third, Perrucci wants to have rural residential zoning changed so he can make money. Fourth, Perrucci wants the property taken out of the conservation district, where it protects the Monocacy Creek. Fifth, the increased development will contribute surface waters to the Monacacy, leading to even more flooding in Bethlehem.

This is a serious matter. A person who is politician-friendly is basically altering the LV so he can make a buck. In fact, Perrucci was at a Bob Donchez fundraiser right before coming to Beth Tp to be a pitch man.

You are letting your hatred of Angle blind you to some very real problems concerning this proposal.