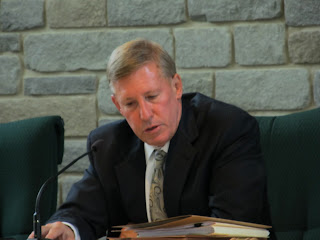 It's unclear whether he's conflicted, but he does have a bad back.

Bethlehem lawyer Jim Broughal is a man of many hats, but is it one hat too many? That question will soon be answered by Bethlehem Township's Board of Commissioners as a result of a possible conflict of interest that Broughal himself has brought to their attention.

In addition to his private practice, Broughal is Solicitor to Hanover Township, Bethlehem Township, the Bethlehem Parking Authority and the Bethlehem Authority. He's also a member of the Delaware River Joint Toll Bridge Commission.

He gets around, but denies he is met by a paladin and servants when he reaches the Toll Bridge Commission parking lot. They do blow a trumpet.

When developer Michael Perrucci pitched a 420-unit luxury Woodmont Mews apartment complex in Bethlehem Township in a low density conservation area on September 19, it sounded very similar to a Woodmont Mews development on 8th Avenue a few years ago. Broughal would know. His firm represented Perrucci's Woodmont at that time.

Broughal has already alerted Township officials that there is a potential conflict.

Developer Michael Perrucci wears a few hats himself. His firm is Solicitor to the Toll Bridge Commission, but only serves the New Jersey contingent. Pennsylvanians like Broughal are represented by a separate firm.
Posted by Bernie O'Hare at 9/21/2011 12:01:00 AM

Jim is a credible man. He serves the community well in all that he does.

I believe you are confusing Mike Perrucci with Jim Petrucci.

Jim Petrucci did the Lowes' and Woodmont Mews on 8th Avenue.

No, I am not confusing them. Michael Perrucci is the developer of Woodmont Mews in Bethlehem, and now he wants to develop another Woodmont is rural Bethlehem Tp. Broughal acknowledges that his firm represented Perrucci's Woodmont. There is no mistake.

Here's a link to the article about Woodmont Mews in Bethlehem, developed by Perrucci.

I won't get all cocky about this bc I have written posts confusing the two.

Hopefully, he is a Democrat. He's feeding from the public trough quite heartily.

These guys keep it close, don't they?

Yet another lawyer who gets it from both sides...

How do they sleep at night?

Jim is a good attorney but has been doing this for 25 years. He goes where the money can be made and who blames him ? How much per hour does one make working as a township solicitor vs a private developer ? The difference is incredible. Takes strong character to say no but at least he should not represent a private developer in a township he represents. He too often does this.

I never liked the "pay-to-play" world. Broughal is known for making many political contributions over the years. But I've watched him as Solicitor to two different townships for over a year. He is fair, honest and very smart. I don't know what these townships are paying (I'll find out), but they really are getting their money's worth. I see many attorneys bc I go to lots of meetings. Broughal is up there in the top.

Jim is as good an attorney than anyone out there. I believe if there was a conflict of interest(not apparent) he would step aside and remove his firm from any discussions related to this project. He is as good as they come, bar none.