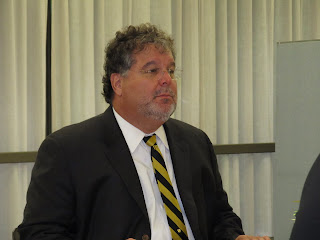 Soon after passing the bar exam, Chris Spadoni and I tried our first cases against each other. He was an Assistant DA. I was representing a drunk driver with a .35 BAC. I argued that a 0.35 is only 1/3 of the .10 that was then required for DUI. But some asshole on the jury did the math, and it was light's out for me.

President Judge Al Williams was doing a slow burn during the trial, in which he had to put up with two inexperienced lawyers who were taking shots at each other the whole time. When the case was over, he looked over his glasses at us and said, "You two. In my chambers. Now!"

When we got in there, he complimented both of us and said we'd go far.

He was half right.

Since that time, Spadoni is the person who actually helped me run in my first long race, back in the day when he was a runner himself.

He's also told me that whenever Ron Angle and I are on the same side of an issue, he knows we must be wrong. Spadoni recently failed to take his own advice and sided with us on a Gracedale issue. All three of us went down in flames.

Over the years, Spadoni has mastered the art of looking extremely serious, as you can see in this picture from last night's zoning hearing.

Maybe Recchiuti can take over as Council Solicitor, God knows he needs a job.

Stoffa hack, who gives a shit.

You obviously do, commenting here on a Saturday afternoon.

Consider him a friend!! Everyone can say what they want... Chris is a good man..., even if he is getting old!
He has done me many favors!

Spadoni is a fantastic attorney and as such a great assistant solicitor to the county, and NOT a Stoffa crony...or anyone else's crony for that matter. Anyone who has met and talked to the man or even just met him for more than 30 seconds would KNOW this is the kind of guy who has cronies of his own, not a crony himself (not in a bad way; he's got a strong, independent personality is my point). Hell I don't think you could even GET him to work on something he didn't (HIMSELF) believe was the right or good thing to do.

That's the reason he ignored his own (good!) advice about not being on the same side as you and Angle when you two agree on something (I'm typically of the same opinion as Spadoni on this but never thought about it quite that way til now)....because he knew it was the right thing for the county, the taxpayers AND the patients there for Gracedale to be sold.

And to top it all off, though he's GREAT at hiding it, he is one of the more thoughtful and caring of the attorneys I've met (no offense to the attorneys out there but we DO have stereotypes for a reason...you are not always the largest-hearted, most thoughtful [of other humans feelings] group of people, but there are definitely plenty of exceptions). I've heard woman who've known him describe him as "a teddy bear," tho I think id be more apt to call him a grizzly bear heh anyway...

Happy Birthday Solicitor Spadoni! And don't worry, you don't look a day over 65!

Nice to see Chris has a fan.