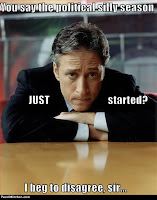 With the passing of the Labor Day Holiday, it's time for political campaigns to go into full gear. LC Exec Don Cunningham calls it "silly season," when bombastic claims are made, only to be quickly forgotten the day after the election. It's my favorite time of the year.

Most local parties link to the campaigns of their candidates. But in yet another sign that it is falling apart, the Lehigh County GOP has failed to list a single candidate seeking election this Fall, with the sole exception of its candidate for Lehigh County Controller, Glenn Eckhart.

At my left sidebar, I have links to pages for races in Allentown, Bethlehem, Easton, Lehigh County and Northampton County. I might add a few more pages for some other interesting races in West Easton, Bethlehem Township and Whitehall. Throughout the Silly Season, I will update with links to news articles and blog posts.

You are free to comment there, but because those pages will be up for months, they will be moderated. But here's how things look now.

"The Mission of the Allentown City Council is to provide, in a democratic and transparent manner, efficient and effective services which will make the City of Allentown a better place in which to live, work and play." Three seats are open. Incumbent Michael Donovan is stepping down.

An independent office, the Controller is the City's financial watchdog.
✓ 'Longtime Allentown employee to run for controller’
✓ Lou "the watchdog" Hershman

"City Council is the legislative body of Bethlehem city government. The council is composed of seven members, who are elected to four-year terms. All council seats are determined by citywide elections; there are no districted council positions." There are three seats up this year, including an open seat created by the retirement of Gordon B. Mowrer.

Bernie-
When is it legal to put those campaign signs out? Someone already has them all over her lawn!

Actually, It's legal to put signs out now. There might be an ordinance against it, but it would be contrary to the First Amendment.

Thanks for the Waitkus link. Will update my page.

Where are the school board candidates

Do you want that covered? I will have to look for contested races. I have an aversion to school boards.

Chris Miller on NASD board should be worth an admission charge. Give 'em hell, Chris!

Thanks. I'll load it to the page for LC races, as well as here. I appreciate the link.

We all know Dean fell short in his bid. If it makes you feel better to give him a dig anonymously, well that's you.

I'll drink to that!

Bernie,
This is an excellent community service, and even though I know you're not crazy about school boards, I think a lot of people would appreciate a comprehensive list.....you know, this is one of those "SOMEBODY should do such-and-such" kind of things....

OK. I'll create a page for school board races.

I hear Chris Miller is pledging to give up his public teachers pension, when asks current teachers to give up theirs. You have to admisre a guy like that.

I don't believe that.

I have a hot girlfriend, can I run for office?