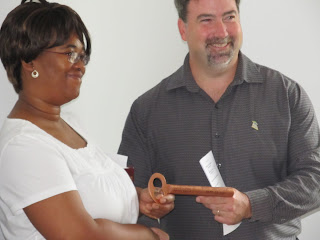 Habitat Lehigh Valley dedicated its 90th home on September 24 at William Street in Bethlehem for Elizabeth Lemos and her two children, Joshua, 16, and Kiana, 12. The three-bedroom home, which includes a garage, was sponsored by the Bethlehem Housing Authority and built with the hard work of numerous volunteers, including 250 hours of "sweat equity" from Lemos herself.

Mark Ehrle, Chairman of the Board of Habitat Lehigh Valley, stated another six homes are "in flight" right now, and are acquired via donations and grants. People are selected for home ownership as a result of an application process requiring good credit scores and an income level that that is 35-65% of the area's median income. He indicated that, so far, all homes have been built in the Lehigh Valley's three cities.

Lemos was presented with housewarming gifts that included a bouquet from Bethlehem Garden Club, an embroidery from LV Embroidery Guild, and a big box of Just Born candies. "Don't eat them all at once," wisecracked mentor Dot Cressler.

Ehrle gave Lemos a Bible as well as an honorary key.

Lemos' son Joshua is a senior at Liberty High School and her daughter Kiana is in 7th grade at Nitschman. Lemos stated that she is looking forward to seeing her son go off to college so she can take over his room as a study.

Despite having only weekend free every month, Lemos was able to complete her 250 "sweat equity" hours in just one year. Lemos thanked the twenty or so people at the dedication for all their help, and for removing their shoes. "I am glad I decided to turn to Habitat," she said. "I never thought I would be able to own my own home. Now look at me!"
Posted by Bernie O'Hare at 9/24/2011 07:00:00 PM

I volunteered some time with our church's sponsorship of a Bethlehem Habitat home. I mainly hung siding that day. I think Habitat for Humanity is a wonderful program.

These are not some government-based housing projects. Personally, I have a mix of conservative and populist viepoints. On this I'll just quote from my favorite movie:

"But he did help a few people get out of your slums, Mr. Potter, and what's wrong with that? Why... here, you're all businessmen here. Doesn't it make them better citizens? Doesn't it make them better customers? You... you said... what'd you say a minute ago? They had to wait and save their money before they even ought to think of a decent home. Wait? Wait for what? Until their children grow up and leave them? Until they're so old and broken down that they... Do you know how long it takes a working man to save $5,000? Just remember this, Mr. Potter, that this rabble you're talking about... they do most of the working and paying and living and dying in this community. Well, is it too much to have them work and pay and live and die in a couple of decent rooms and a bath? Anyway, my father didn't think so. People were human beings to him. But to you, a warped, frustrated old man, they're cattle. Well in my book, my father died a much richer man than you'll ever be!"

The concept behind Habitat is noble but you need to check out some of the Bethlehem's chapter's "older" houses on south side. They are in ruin! Filthy, torn screens, broken windows, bare lawns, dirty siding, debris everywhere.
Habitat has not been a good neighbor. It's failed to teach some of its homeowners common courtesy which stains the entire nonprofit's mission.

If that's true (and you're anonymous so I don't know if it really is), that is sad. Give me the addresses of three properties on Bethlehem's south side that are run down and in ruin. I will be happy to find out what is going on.

Lighthouse is quoting Jimmy Stewart from "It's a Wonderful Life."

Bernie
Regarding someone's earlier post. Here's a thought. You're a great reporter and researcher. Habitat LV
was founded in 1989. Say their first home went up two years later. That's 1991. Now it's 2011. How do these homes look now? Is Habitat a good neighbor? Are the early homes still in nice shape? Maybe you can find out.

A couple of things:

A Habitat for Humanity home doesn't necessarily remain a HfH home. The owner may sell it; HfH has the right of first refusal to buy back the home. (Please note that my cites are general; there are different chapters within the main organization so minute details may vary.)

These may have originally been HfH homes, but they may not be at this time. HfH holds 2nd mortgages on the homes to prevent "flipping" the homes.

As HfH works so closely with their homeowners (sweat equity, etc) it would be really surprising if while an HfH 1st mortgage was in place they would let it run down to the degree being described. HfH also has a very low foreclosure/default rate because of their constant monitoring of the mortgages. The rate cited here is about 1% nationally:

It just seems odd that HfH would let their homes deteriorate like this if they still had an interest in them.

The biggest flaw with HFH is the fact that they build low-income housing in areas that are predominately, or completely, low-income.

This may be the easiest way to fulfill their mission but I don't think it helps the neighborhoods they build in at all.

If it puts a homeowner in there who has pride in her home and is responsible, isn't that helpful?

"Regarding someone's earlier post. Here's a thought. You're a great reporter and researcher. Habitat LV was founded in 1989. Say their first home went up two years later. That's 1991. Now it's 2011. How do these homes look now? Is Habitat a good neighbor? Are the early homes still in nice shape? Maybe you can find out."

Flattery will get you nowhere.

I could do something like this: (1) run a search on all homes acquired in NC since the program's inception; (2) search those properties to determine the current owners at this time; (3) check the deeds for any requirements about appearance, etc.; (4) physically inspect the exterior of the homes.

That is very time-consuming, but I'll do it. It might be a story with a happy ending. It would be helpful if the anon who posted earlier could give me some addresses.

When I was seaking to Ehrle, he explained this was the 90th home and the 93rd owner. That indicates some of them don't work out. But 3 out of 93 is pretty good.

You should investigate why the last director,a retired police officer was asked to leave... Now that would be a good story-hint: he's good friends with Villani-the same Villani they bought a lot of land from ...