Walt Garvin's Got the Blues 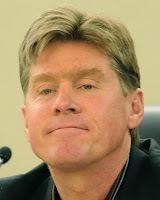 As Northampton County Dem Bossman, Walt Gravin has continued the dictatorial style set by his predecessor, Joe Long. When Vice Chair Kiki Schock resigned in June, she decried "the secrecy, the lack of transparency, the lack of respect for rules and proper order, the lack of respect for rights, the disregard to democracy, and the bully tactics that are used to repress." A month later, he refused to allow me to vote on Kiki's replacement, even though I am - believe it or not - a committee person.

Apparently, his control tactics extend to another group, the Lehigh Valley Blues Network, where he is President. He's been accused of attempting to intimidate some members.

Hard to believe that!

In addition, he is accused of taking money for newsletter ads from groups hosting events, and then failing to run the event until after the event has taken place.

Unhappy members have been hounding him for a general membership meeting, which traditionally occurs on Sunday afternoons in Emmaus. But he's set one up for this Monday, 6:30 PM, at the Tally Ho in Bethlehem. This will present conflicts for half of the members, which apparently is what he wants. Complaints about his arbitrary style are being deleted from LVBN's Facebook page as fast as they are posted.

How ironic that a person who complains about Charlie Dent's lack of transparency is himself a person who tries to stifle differing opinionions, even to the point of altering LVBN minutes.

This is the message that Mary Pierce and Les Houck are trying to circulate:

Your Voice Should be Heard!!

Walt Garvin has called a general membership meeting for the Lehigh Valley Blues Network on Monday October 3rd in response to the overwhelming demands voiced by disappointed members on the LVBN facebook. Despite the fact that he publicly posted (then later deleted) that the meeting would take place later in October after the IBC competition was over.

It was suddenly announced, late Monday night on Facebook that a meeting would be held in 6 days.
Unlike past LVBN meetings, Jams and other functions that typically are held on Sunday afternoons in a private setting this meeting is being held on a Monday evening in a public place, no doubt by design.

The meeting should be rescheduled to accommodate the membership not the current leadership agenda.

We urge you to make every effort to be at this meeting so that the voices of the ACTIVE paid members will be heard. If for some reason you are unable to attend we further urge you to publicly state your concerns, opinions and suggestions on the LVBN facebook page.
Posted by Bernie O'Hare at 9/30/2011 12:06:00 AM

What do you expect from the Long boys. Another card carrying member.

ok, i get it's Garvin, so that makes it marginally relevent.

That a union thug uses union thug tactics should not surprise anyone.

Is Garvin a Union Thug? I don't think he is.

He is a Long Dem, just like Dertinger, McClure and Baron Von Footinmouth!

That still does not make him a union thug... Mclure is an attorney, Barron is a controller and Garvin runs a blues thing, non of them belong to afsme Seiu Steelworkers or any of the unions representing northampton county workers, so I ask again like the other question "is Garvin in a Union" ?and if not why do u keep up the union thug crap?

Isn't he the son-in-law of some swanky businessman?

Baron used his PUBLIC position to try and strong arm a company for the union. Dert has a no-show union job and McClure is in the bag for the unions.

So yes they are union thugs. They haven't done anything to help the unions but the union leaders are to dumb to figure that out and hand them cash for their efforts.

So Unions Fight for people like you to have 8 hour workdays, lunch breaks, coffee breaks, weekends off or overtime, and a reasonable living and you think they are all Thugs?

What is happening here is a fool who will soon part with his money when his continued Union hatred, and blind loyalty to other confused people results in the failure of the Union movement, and he is soon replaced by a kid who will work for 7 bucks and hour and never complain about working 12 hour day... etc

Do you get it, or are you that ignorant?

What we get are politicians not corrupt like Baron and Dertinger.

The Blues may not have political relevance but what it shows is a pattern of behavior. A leopard does not change his spots. He has always been this way and he will always be this way.

Fascinating. How desperate must the former "LVBN opposing prez. candidate" be to invest such an inordinate amount of her time - spreading the 'good cheer' to any "free outlet" on the bandwidth - on a calculated "smear campaign" against Walt Garvin.

Am I not mistaken? Wasn't Mary Pierce running for LVBN office last year -- and LOST?

For several members present at the meeting when the election results were read last year, the frightening response by Mary and her entourage - and I quote "OMG... HOW COULD THIS HAPPEN? HOW DID WE LOSE?" says more about her sense of supposed 'open and non-calculating means' than any of the ugly accusations she's been torching Walt with.

One has to wonder WHY the surprise? ..the indignancy and disbelief with which they regarded their loss. That, to me, is much more suspicious than any empty accusations. When that person then leads an entourage of ugly character assassination against their former opponent, two things come to mind: 1) Why the feverish, emotional hatred and lack of professionalism over the voted loss?; and 2) Is this really the kind of person that ANYONE would have wanted to run the ship to begin with?

Since that fateful day when she and her entourage LOST the election ...they seem to have entered into a non-stop campaign to discredit their own perceived "opposition". Instead of working together as a unit - recognizing that the LVBN is a VOLUNTEER organization meant to be an enjoyable membership for those who enjoy/love/support the blues... she has effectively turned it into a MOB MENTALITY Harassment and Haranguing Committee that wreaks of insecurity and ugliness.

And, speaking of "volunteering"... unlike the Board members who give their time freely to the LVBN... doesn't Mary Pierce run a business that profits from the marketing of placing Blues Bands in specific locations? hmmmm.... sounds like a bit of a conflict of interest to me.


Frankly, reading the commentary on the LVBN page is like watching a public stoning... where even innocent bystanders are drawn into the ugliness of Adult-Sized Whining and - even more frightening - unsubstantiated accusations that in most courts of law would be considered libelous.

Opinions are one thing; slanderous unsubstantiated accusations are quite another thing altogether.


Frankly, they're making the LVBN look like an Adult-Sized-Private Sandbox.. with all the ugliness of childlike insecurities, attacks and bullying that - if it were happening on the schoolyard, would now be considered fodder for Bullying Lawsuit -- to TEACH CHILDREN HOW TO BE CIVILIZED TO ONE ANOTHER.

In that proverbial snippet of wisdom (modified for present members):