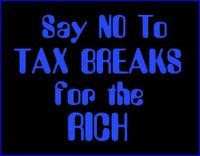 Who the Hell would endorse a tax break for a rich dude? Easton School District, Palmer Township and very soon, Northampton County Council. And they are right. Let me explain why.

Before Charles Chrin, Howard Seiple was the largest landowner in Northampton County. A farmer, his tracts extended into four different townships.

After he died, much of this property was sold to developers, who built McMansion after McMansion on what was once verdant farmland. That puts tremendous pressure on school districts, who must educate the children without getting enough money in taxes. It's also a drain on municipal government, which must maintain the infrastructure and provide emergency services to what was once quiet farmland.

Charles Chrin purchased 689 acres from the Seiple Estate. Unlike other developers, he's avoided the residential development temptation. I doubt this is altruism. Chrin knows he can make more money with an industrial park.

But it's still infinitely preferable to another housing development, or a 420-unit apartment complexe. It will increase the tax base, reducing the burden of everyone else. The Chrin TIF will allow him to defer the increase in taxes so he can use that money to finance a Route 33 interchange that will draw business.

As I've told you many times, I'm no fan of corporate welfare or Chrin. But this is no handout. It benefits everyone. No risk is assumed. In the middle of a recession, it could produce thousands of jobs.

Dave Colver, Chairman of the Board of Supervisors in Palmer Township, is the person who persuaded me that this TIF is necessary. Here's what he told Northampton County Council's Finance Committee last week.


We're all in the same boat - the Township, School District and the County. We need money to operate. We can only deal with tax increases so much. In Palmer, we have looked at the north end of the Township as the way to offset some of that future tax base down the road in the future.


Let's face it, this is not a quick thing. This is not gonna' fix it in three to five years. There's no money coming off of this in the first five years. Everybody gets what they've been getting for farmland. We get about $15,000 on all that land up there. That's it. We can continue to get that $15,000, you folks can continue to get your $25,000, we can all go home and forget about it and Charlie can plant corn. Game over.


Our concerns. Zoning. Our comprehensive plan for every ten years - we're doing a new one now - past twenty years has looked at the north end development and an interchange to handle the infrastructure. We cannot develop the north end of that Township without an interchange, period. There's just no way to do it with the traffic, everything, that's needed in that area. So we have ... my successors [he means predecessors] ... I've only been there 1 or 14 years ... but my successors looked at that as the way to develop the north end. This is a way to make it happen.


The need for the interchange is imminent. The Township will not let, and the developer has pledged, no residential development, period. The Township will not allow it. We're controlling the zoning. No Bog Boxes. We're not gonna' see the million, two million square feet under roof, with twenty or thirty people operating forklifts so that the trucks can run around the clock and get on an interchange. Not gonna' happen. We control it.


We've got a developer who is willing to work with the Township and who is not looking for residential or the Big Box development.


We looked at the exposure. What exposure is Palmer Township, the County and the school district have with this? If it all fails, if it falls flat, is there any tax dollars that Palmer, the school district could be resonsible [for]? As you've heard, in the whole discussion prior to me, it's all being funded - the TIF is being funded - through the increase in the buildings. The taxes? It falls back on the Neighborhood Improvement District, which at this time is the property owner and anyone who would purchase in the future. And if that fails, it's the bondholders. There is zero risk. None. Find it, tell us what the risk is? There is none.


This is a way for all three of us to work together. It's not too often the County, the school district and the local municipality cross paths on a project that comes together to do something with zero risk for the betterment that could create two to three to four thousand jobs over the next eight - ten - twelve years.


My Board voted unanimously for it. he School District, as you heard, voted 6-1 in favor of it. I hope you folks at this Committee level, and when we get to County Council, at the County level, will see the merits of this project and support it unanimously. It's a good project. It's good for the County as a whole, and it brings jobs, it brings construction, all these ancillary things.


We're talking about 689 acres. There's another couple hundred acres outside of this district right there in Tatamy, Stockertown, Lower Nazareth, Forks. Everybody gets the benefit of this interchange.
Posted by Bernie O'Hare at 9/25/2011 12:02:00 AM

We need to do anything necessary to encourage the job creators. Who is more deserving of government assistance, a freeloading bum or a job creator?
Government should focus on freeing the schackles on the creators and priming the creation pump with tax breaks and creative financing.

It's also a drain on municipal government, which must maintain the infrastructure and provide emergency services to what was once quiet farmland.

Why would this be any different with an interchange development?

The Chrin TIF will allow him to defer the increase in taxes so he can use that money to finance a Route 33 interchange that will draw business.

As I've told you many times, I'm no fan of corporate welfare or Chrin. But this is no handout. It benefits everyone. No risk is assumed. In the middle of a recession, it could produce thousands of jobs.
Where is your evidence that this will draw business? That's a huge assumption that seems to be particularly unfounded right now. Businesses increasingly do not want these kinds of offices.

(1) How would this be different w/ an interchange? - Jonathan, this is basic stuff. Residential development imposes the biggest drain on a township's resources for the fire and police protection, as well as plowing those roads. It is an even bigger drain on school districts bc the taxes paid by those properties are always much less than it costs the district to educate the children. But industrial and commercial development imposes a much lower burden for police and fire protection, produces no children to educate, and are big sources of revenue for municipal government and schools. So yes, it will be much, much different with an interchange development.

(2) Assuming job production? Jonathan, you do not go to meetings or talk to the players. I do. This interchange WILL produce jobs. It may not be 4,000, but there are businesses who are just waiting for that interchange so they can move in. There are several economic development officials and county officials who have told me that privately. Your whole argument about industrial parks being a bad thing is a canard. It's very easy to fill up an industrial park in this area bc we are half way between NYC and Philly. All that is needed is quick access to an interstate.

The notion that industries are looking to relocate in our urban core is downright laughable. If that were true, Allentown would be doing great, but it's dying.

You need to recheck your links and instead of questioning me so often, perhaps you should question them.

What is the vacancy percentage of the Lehigh Valley's current industrial parks? Where will the people who will work here live and how much new housing will be needed to accomodate them? Won't this burdeon the school districts as well? I am not so sure that this is going to be a winner for our region. Does the LVPC have a position on this project?

If you look at the LVIP webpage, you will see they are actively marketing the Saucon tract and they claim to have 1,000 acres ready. I do not see them marketing vacancies in existing parks. hose do exist, but I would argue they are a reflection of the economy, or their location.

When businesses come to the Rte 33 interchange at Tatamy, they will bring people with them. But they will also hire people in this area who currently are unemployed. The increased tax base at the industrial site will more than offset the demands placed on neighboring municipalities. We are talking $414 MM in private investment and 3,700 jobs, according to a study by the Dietrick group. In addition, there will be construction jobs and many spin-off jobs in the surrounding area.

Now we cold say No and that it's a bad idea to gobble up farmland. But we have little control over what Chrin then decides to do. Then you could see all kinds of residential development, with no jobs at all.

I do not know the position of the LVPC on this development, but would guess it supports the project.

I ask this because of what happened in Hanover Township, Northampton County with the Jandl property. Back in the late 1990s, if you recall, David Jandl proposed industrial development for 350 acres of land that he owned. He didn't ask for any assistance from the government at any level with tax breaks or financing. In fact, he was more than willing to spend $5 Million of his money to upgrade the infrastructure.

Long story short, there was a very small group that complained and the lacking of a spine township committee pushed to have 1/2 the land residential. Then they pushed to have a 55+ community added to the project. That housing is right in the middle of the new industrial land and LVIP4.

The push from the beginning was from John "Jay" Finnigian who joined the board and is now the township manager.

I tell this as a cautionary tale. What could have been a very effective use of land, creating both tax revenues and jobs, has been over run with McMansions and a 55+ community.

I can understand some breaks for the bridge replacement, but the fear of housing is not a reason to give a tax break. Reality is that this is prime real estate and Chrin was planning on doing this without the tax incentive. This is just a developer who is taking advantage of the current economic situation to squeeze tax incentives from the taxing bodies involved. And, as we have seen in Hanover Township, NC, if things don't work out as expected, we could have a much different development than the one being discussed today.

Publius, Like you, I believe Chrin would do this anyway. He's already invested $10 MM. But I believe he'll do it much more quickly with a tax deferral. The jobs are needed NOW, not 50 years from now.

for the last 20 years, this is exactly what Palmer has wanted It is unanimous. That feeling is not going to change so quickly.

It is going to happen no matter what so there is no use complaining. History will judge whether or not this was a wise decision.