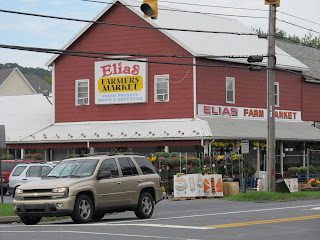 It was an anti-climatic end to Bethlehem's most controversial zoning matter in recent years. But on September 28, as a hard rain pelted Town Hall, few of the original participants were present. Gus Elias, one of the owners of Elias' Farmers Market, located at 3131 Linden Street, sat in a back row, flanked by his attorney, Joe Piperato. On the other side of the room sat City Council candidate Al Bernotas, one of the three litigants who have fought this proposed expansion tooth-and-nail. He was flanked by a West Easton Borough Council candidate.

Once again, there are very strict conditions: use of the warehouse for wholesale distribution is banned; idling by any vehicles or storage of any buses or trucks not already owned by Elias is prohibited; no refrigerated trucks may run on the property; compressors must face Linden Street, away from residences; buffering and landscaping is required; no expansion in hours of operation; no additional retail space is permitted; no future expansions of the warehouse will be permitted; and no trash pick-up before 8 AM.

Bernotas has vowed an appeal, once he receives the written opinion.

I have two more stories about last night's meeting. A "zero carbon neighborhood" is being planned on the South Side. And Bethlehem zoners are going to the dogs. I'll give you the details, but need my beauty sleep. I'm getting up at 6 AM to speak to a college class.

i've told you before...stalking coeds at the dining hall is not"speaking" to a college class.

And who will "really" enforce all those conditions? Thats the sad thing about zoning hearing boards approvals. They set conditions and they don't get enforced for the most part because they are difficult and subjective at best. Does anyone think that the City will be sending its Zoning Officer to Elias everyday to make sure a truck is not idiling thats not supposed to? Really?

Difficult and Subjective at BEST???

And they would be sending the code enforcemnet officer to enforce the Difficult and Subjective conditions.

But nothing goes into effect if they appeal it again...

Its all a big joke. Bethlehem is going to the DOGS and to the slums also. It used to be a nice city to live in but you mark my words, its going to be another Newark, NJ soon with all the commercial buildings that ZHB is allowing to infringe on Residential property. They have no idea how they are ruining this city. I blame the person who put those ZHB people on the board, and their Solicitor too who I hear works for a land developer, great, huh! You figure out who that was, yes, John Callahan and he is driving the city into bankruptcy. Bethlehem is a lose-lose city with those clowns running it. Run for the hills people, get out now while your property is still worth a penny.....

Bernie, I don't see you reporting on this:

Take it from us, the "we were here first" argument never ends well.

I'd hate to think I paid tuition to have my offspring hear you. College used to be about imparting knowledge; not reveling in the buffoonery of bloggers babbling nonsense to classes and crude comedians speaking at graduations. Education is no longer about knowledge. It's a big, expensive side show.

I doubt you have any offspring.

"Bernie, I don't see you reporting on this:

cry me a river along with the jews, the muslems, the black, etc, etc, etc - what a cop out crock

Zorn, I think you missed a few ethnic minorities to insult.

Anonymous said...
Its all a big joke. Bethlehem is going to the DOGS and to the slums also. It used to be a nice city to live in but:

Move Back to Jersey where you came from, your the reason it's going to the dogs.