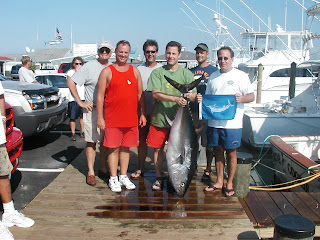 Timm (that's mm, damn it!) Tenges is the Lower Nazareth Township manager who, under the name FULibs, said this: "Any half baked liberal can sit on the sidelines, write half truths on websites and spread doom and gloom from left wing intelectually [sic] dishonest scientists." He was angry at the time with another bottom feeding blogger.

You can't blame Tiny Timm (that's mm, damn it) for hating bloggers. We make reporters look good! But you sure can question his judgment in going on a fishing trip with Bethlehem Mayor John Callahan and developer Lou Pektor, especially since Tenges shepherded zoning changes for a 320-home Lou Pektor development in Lower Nazareth. Although Tenges claims he paid his own way, this should have been a career-ending escapade.

Instead, Tenges is going to be doling out gaming grants. Last night, Northampton County Council appointed him to the Gaming Authority. Before that happened, Republican Council members received an email giving them their marching orders from the local committee.

Ann McHale tried to table the appointment because there was no letter from the Nazareth COG, endorsing Tenges. But County Executive John Stoffa produced the letter, which he had just received. And the vote was 8-1 in Tenges' favor, with McHale casting the sole No vote. In fact, Angle called Tenges a "man of distinction."

I agree with the stinky part.

Local parties, whether they are Democrat or Republican, really have no business telling Council members how to vote. But this is good news for Tenges. Imagine the fishing trips he can go on now!
Posted by Bernie O'Hare at 9/16/2011 12:00:00 AM

Actually Bernie it was non partisan. The Nazareth Area Council of Governments which represents 10 municipalities and 2 school districts had voted to support Tenges. There were both R's and D's who voted in favor of that appontment because he would represent NAZCOG. Someone from outside the COG area would not have been representing the area the seat was designated for, Concern that Tenges has gone fishing or done anything else with a Democrat is not an issue since this was not a political but rather a nonpartisan regional decision. Had a Democrat from the area applied and the COG voted for him the exact same email would have been sent.

Being a member of a political committee does not disqualify a person from public service or appoiontment to boards.Neither does it make a person intolerant of working in an unbiased manner.

Had the 2 Democrats emails been readily available, they would have received the exact same commnication, as did John Stoffa the council and the head of the gaming authority.

We are sorry if Tenges was not your idea of the person for the job, it was the choice of the NAZCOG to send up to council for approval.

The letter was not from a committee person it was from the Chairman of the Nazareth Area Council of Governments, and was the second letter sent endorsing Tenges. Tenges was endorsed by the COG and support for him has been made public for more than a month.

So why did Stoffa put his name forward if the guy is a crook?

Doesn't Stoffa submit and Council approve or not. Stoffa could have refused to submit his name. I know people who have tried to get on committees and Stoffa doesn't even bother to reply to them.

so why the special treatment for this clown?

I am aware that Tenges was the choice of the COG, which is why that is the name that Stoffa forwarded.

The simple reality is that the local R committee decided to pressure the Rs on Council. The email went solely to the Rs. I know one R Council member, and it not Angle, who complained to me about being pressured this way. The job of the local party is to elect members of that party, not get involved in the issues that the elected officials decide.

And I don't really care that Tenges is the choice of the Nazareth COG. As Cusick pointed out last night, nothing n the ordinance requires that a member be selected by the Nazareth COG. I don't know where everyone got sidetracked by that notion.

And the concern about Tenges is not his association with Democrat Callahan. It's his association with a developer doing business in is township. That was terribly poor judgement, and you would be among the first to condemn it if it were a Dem in Tenges' shoes. Now he is in a position where he will be doling out large chunks of change.

What is the purpose of gaming grants? Is it for law enforcement and curbing the negative affects of gambling? Or is this money being used for community projects that have nothing to do with gaming? Just curious.

I have to ask the question here as crime knows no boundaries. Why is it that only our 3rd class cities are worthy of a defined benefit.

The gaming group was put together by Angle/Stoffa because Stoffa wanted to get momney to people like Angle as walking around money for projects totally unrelated to the impact of the casino.

This was an impact fee for contiguous municipalities and the county. Angle/Stoffa truned it into a politcal grabbag.

Most of it should have gone to human serices and Hellertown, not Bangor or Nazerth.

Shouldn't this money got to fight regional crime?

I know Lehigh an Northampton Counties get a defined share as do Allentown, Bethlehem and Easton. It seems like their should be more wide spread distribution of gaming benefit, especially to fight crime.

I am not against spending this money for community development. I am concerned how the money is distributed. Bethlehem does have exclusivity on Gaming however the Sands now wants to get into the retail and entertainment. We should be mindful that millions of Public Dollars were pumped into that site as a catalyst.

Upwards of $15M dollars of Local gaming share is floating around. Who is benefiting?

The money goes out based on a formula. The first round of grants are impact-related, and are for the surrounding municipalities. There is a second round for other grants. Neither Stoffa nor Angle have any control over how the grants are awarded, nor have they tried to exert any control. Individual gaming authority members can confirm that they, and nobody else, decides how the money is apportioned.

We all know how accurte and non-biased O'Hare is when reporting about Angle and Stoffa. The worst pairing in the history of Northampton County.

You have failed to provide even one example in which gaming money has been improperly granted, to say nothing of connecting either Angle or Stoffa to it. All you can do is make bald and false accusations. Anonymously, of course, like the coward you are. You are a bitter hater.

Good Posting I search long time for exact thing you posted your website. Am really lucky to get your posting. Thank you I pass this news to my facebook. My role is Aluminium Scaffodling In Chennai For past 20 years. All the best for your process. By Regards Scaffolding in Chennai