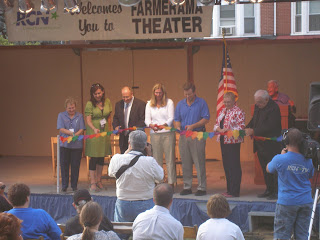 ALLENTOWN - The Charlie Dent for Congress campaign has confirmed that LV Congressman Charlie Dent attended the Great Allentown Fair late Monday night and had a good time, too. He even helped cut the ribbon to start the festivities.

Inside sources, who ask not to be named, claim Dent will be back, possibly with another woman - his daughter. They are reportedly considering an intervention to help Allentown Mayor Ed Pawlowski deal with his unfortunate addiction to funnel cakes.
“I hope everyone will join me in visiting the Great Allentown Fair and take in the wonderful agricultural traditions of our community,” said Charlie. “There are a ton of great acts and amusements. I know that my daughter is especially looking forward to the Jonas Brothers concert.”

Congressman Dent sent this release to preclude another nasty salvo from his opponent who bizarrely and falsely accused him of failing to attend Musikfest this year – after the Congressman had already attended on two separate occasions.

Oh yeah, but what about the Slate Belt's Blue Valley Farm Show?

Charlie claims he was there, too, and enjoyed himself and the Jacktown ice cream immensely.

These announcements follow his startling appearance at church on Sunday, where he made sure to stay thirty-three seconds longer than candidate Siobhan Bennett.
Posted by Bernie O'Hare at 8/27/2008 12:50:00 AM

Are U sure he's a christian? Did he get to the fair before or after Bennett? Does he have all his teeth, or is he from the slate belt , too?

I won't be able to answer your questions until I get the latest round of news releases.

I should have asked that during my interview.

"They are reportedly considering an intervention to help Allentown Mayor Ed Pawlowski deal with his unfortunate addiction to funnel cakes."

When he's done helping the mayor, I'm next.

Waffles & Ice Cream is my weakness. And funnel cake. And gyros. And that corn on the cob w/ all those spices. And . . .

I saw the mayor at the fair yesterday eating corn on the cob. you guys may have something in common.