LV Congressman Charlie Dent: Trust an Issue in any Campaign 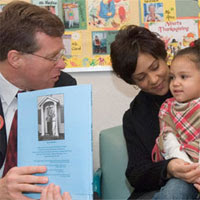 LV Congressman Charlie Dent, at a news conference today, expands on his complaint concerning Siobhan Bennett's $110,000 salary at Properties of Merit. I have forwarded his statement to the Bennett camp for reaction.

In a recent interview Siobhan Bennett falsely accused me of using my position in Congress to enrich myself. When confronted by the press about her false charge she was completely unable to substantiate her absurd claim.
Siobhan Bennett should be the last person hurling accusations regarding personal finances, given her abuse and waste of taxpayer money at Properties of Merit (POM). She’s trying to deflect attention away from her own significant problems that she created. But, it won’t work – and she knows it.
My opponent already has a record of handling taxpayer money and it is not one she should be proud of. POM is largely funded with state and other public money.

In other words, money from us – the taxpayers.

It has been well-documented that Siobhan helped set her own salary at $110,000 – an excessive amount for her job by any standard – whether measured against the salaries of other non-profit executives in our community – or more importantly, by the standards of the IRS.

In fact, State Senator Pat Browne, a CPA and Chair of the Senate Finance Committee protested against this abuse and said Bennett’s salary was excessive and in violation of IRS rules. Lehigh County Executive, Don Cunningham, a Democrat, held up all county funds for POM after learning about Bennett’s abuse of taxpayer money.

Frankly, it is amazing that she’s still being paid anything at all. She should have been held to account and fired for her gross misconduct.

Ms. Bennett has dismissed this issue and wants the taxpayers to believe that everything is okay. But, it is not.

In fact, the reason I’m discussing this matter today is because of a well-publicized, similar situation that has occurred in Western Pennsylvania. As it happens another politically-connected individual set herself up as the executive director of a non-profit called the Volunteer Action Center. Like POM, this group received hundreds of thousands of state taxpayer dollars thanks to her political ties to Harrisburg politicians. Like Bennett, she also took part in setting her own six-figure salary, taking over one-third of the charity’s budget. And, only when questions were made public about her excessive compensation did she try to defuse the situation by cutting her salary by $50,000.

The only real difference is that the attorney for this woman’s non-profit demanded that the salary be reduced retroactively and the excess money be returned to the charity.

In other words, the woman in Western Pennsylvania not only had to cut her pay but also had to pay back her excessive salary.

Less than two weeks ago the woman involved, Darla LaValle, the wife of a state Senator, was indicted by the state Attorney General for other crimes relating to her actions at the non-profit.

Isn’t it interesting that Ms. LaValle is headed to court while Siobhan Bennett thinks she deserves to go to Congress?

Siobhan Bennett should pay back the money that she owes to Properties of Merit and then she should step down from her position until this matter is actually investigated.

Trust is an issue in any campaign. Public officials are expected to meet high ethical standards. I have done my best to be an honorable, trustworthy public servant and I don’t appreciate it when my opponent takes cheap, false shots at my family and our finances. For your inspection, here are my financial disclosures for this year and my opponent’s for the past two years.

And, with all the problems we’ve witnessed in Harrisburg, like Bonusgate, and in Washington, DC from both parties, can we really afford to elect someone like Siobhan Bennett?

And, see if you can find her beloved cash cow, POM, on the state's list of approved charitable organizations that allows them to solicit funds. It is not there, never was. They may be a 501(c)3, but they are not allowed to solicit funds in PA, yet they have done that regularly.

The Solicitation of Funds for Charitable Purposes Act, 10 P.S. Section 162.1 et seq., requires all organizations soliciting funds for a charitable purpose to register with the Department of State's Bureau of Charitable Organizations before they solicit contributions in Pennsylvania unless they are specifically excluded or exempt from the Act.

Does this apply to POM?

I believe it does Bernie.

And it's not a big deal to register, so even if you weren't sure, if you're a 501(c)3 go ahead and register to remove all doubt.

Section 162.6. Exemptions from registration
back to top
(a) General rule.—The following charitable organizations shall be exempt from the registration requirements of this act:

(3) A local post, camp, chapter or similarly designated element or a county unit of such elements of:

(i) any veterans' organization chartered under Federal law and any service foundation recognized in the bylaws of such organization;

(v) a bona fide auxiliary or affiliate of any organization or association under subparagraph (i), (ii), (iii) or (iv);

(5) Senior citizen centers and nursing homes which are nonprofit and charitable and which have been granted tax- exempt status under the Internal Revenue Code of 1986 (Public Law 99-514, 26 U.S.C. § 1 et seq.), provided that all fundraising activities are carried on by volunteers, members or officers of the Senior Citizen Center and those volunteers, members or officers receive no compensation, directly or indirectly, for the fundraising activities.

(6) Bona fide parent/teacher associations or parent/teacher organizations as recognized in a notarized letter from the school district in which they are located.

(7) Any corporation established by an act of Congress of the United States that is required by Federal law to submit annual reports of its activities to Congress containing itemized accounts of all receipts and expenditures after being fully audited by the Department of Defense.

(b) Effect of exemption.—Exemption from the registration requirements of this act shall in no way limit the applicability of other provisions of the act to a charitable organization or any professional solicitor or professional fundraising counsel acting on its behalf, except that written notice under sections 9(k) and 13(c) shall not apply.

(1) Persons or charitable organizations accepting contributions for the relief of any individual specified by name at the time of acceptance or solicitation when all of the contributions collected without any deductions whatsoever are turned over to the named beneficiary for his use; provided that all contributions collected shall be held in trust and shall be subject to the provisions of 20 Pa.C.S. Ch. 71 (relating to trust estates). The secretary, the Attorney General, any contributor or any person who provides any goods or services for which funds are expressly or implicitly solicited shall have the right to petition the court of common pleas of the county in which the trust is located for an accounting of all contributions. For purposes of this paragraph, the trust shall be deemed to be located in the county where the principal place of business of the charitable organization is located. If a charitable organization has its principal place of business outside this Commonwealth, all of the following shall apply:

(i) If an affiliate is soliciting contributions within this Commonwealth, the trust shall be deemed to be located in the county where the principal place of business of the affiliate is located.

(ii) If a person is soliciting contributions within this Commonwealth, the trust shall be deemed to be located in the county where the principal place of business or the residence of the person is located.

(iii) If there is no place of business or residence within this Commonwealth, the trust shall be deemed to be located in the county of Dauphin.

(3) Charitable organizations whose fundraising activities are carried on by volunteers, members, officers or permanent employees and which do not receive contributions in excess of $25,000 during a fiscal year, if no part of their assets or income inures to the benefit of or is paid to any officer or member, professional fundraising counsel, professional solicitor or commercial coventurer. Charitable organizations which do not intend to solicit and receive in excess of $25,000, but do receive contributions in excess of that amount shall file the financial report required in section 5 within 30 days after contributions are received in excess of that amount.

(4) Organizations described in section 6(a)(3) which do not receive contributions in excess of $100,000 during a fiscal year if no part of their assets or income inures to the benefit of or is paid to a professional solicitor.

(b) Filing of statement.—It shall be the duty of the president, chairman or principal officer of each charitable organization to file the registration statement, financial report and fee required under this section. The registration statement shall be made by two authorized officers subject to 18 PA.C.S. § 4904 (relating to unsworn falsification to authorities), including the chief fiscal officer of the organization, and shall contain all of the following information: