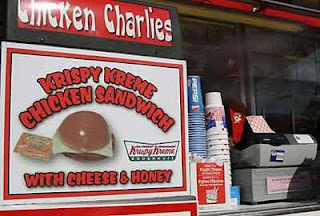 Siobhan Bennett's webpage has a daily counter indicating Congressman Charlie Dent has been ducking her debate challenge for weeks. Strangely, she failed to appear last week at a "debate/candidates" forum at Parkland High School.
LVRamblings: Bennett's camp is claiming you won't debate energy policy. “Congressman Dent is so deep in the pocket of Big Oil companies (- and I've noticed the tanker outside -) he’s refusing to publicly defend his record and have an open debate about the issue,” said Kathryn Seck, Sam Bennett’s campaign manager. Last week, on a local talk radio show, Bennett actually conducted a mock debate with "Chicken Charlie the Dented." Joe Long was moderator.

So are you afraid of Sam? Do you know why she wasn't in Parkland for that debate? Were you supposed to pick her up?

Congressman Dent: [Laughing]"There she goes again with the personal attacks and the name-calling. What'd she say - Chicken Charlie the Dented?"

LVRamblings: In fact, it's probably going on radio right now.

Congressman Dent: "That's fairly juvenile, in my view. There was a debate-candidates' forum scheduled for Tuesday. She sent me a challenge to debate this week. I said I'd look forward to debating her on energy or any other issues. We have received a number of debate invitations. We're going through those right now, but she failed to show up and meet with the Parkland alumni. There were fifty people in the room."

LVRamblings: Do you know whether she was invited?

Congressman Dent: "She was invited. Elmer Heiney invited her. He most assuredly did. I asked him directly. She was not there. She did not attend."

LVRamblings: I guess fifty voters were not enough.

Congressman Dent: "I talked about my energy policy and hers and I can assure you I am not afraid to debate Siobhan Bennett. I look forward to debating Siobhan Bennett on energy and other issues during the course of this campaign. She's going to have that opportunity - I can assure you of that. She can go ahead and do her little faux debates on the infomercial but she better be ready. [Laughing] She better be ready because we'll be loaded for bear."
Posted by Bernie O'Hare at 8/18/2008 01:00:00 AM

Boy, what a choice you have in November, Charlie Dent, the empty suit, or Sam Bennett, the empty head. No wonder people don't vote.

Was that a forum or debate in Parkland? A forum is not a debate. You're stretching the truth again, BOH.

You're playing a semantics game. Many of the local debates are nothing of that kind although that is what they are called. Many candidate nights are very clearly debtaes, although they are not called that.

I have no idea what the format was in Parkland. What I do know is that (1) Dent was there and Bennett was not; (2) Bennett had been clamoring for an opportunity to contrast her energy views with those of Dent; (3) Bennett was invited; and (4) Fifty voters were there.

Her absence, especially at a time when she is calling out for an exchange, speaks for itself.

God, Bennett is SUCH a bad candidate. Inept, self-absorbed, shrill, snide, goofy, emotional and the embodiment of all of the other negative stereotypes used against female candidates all of the time. She is just downright embarassing.

It kills me to admit it but even as a die hard Democrat I still will not vote for her. I will vote for Obama, skip the Congressional race, and vote for other qualified Democrats down ballot.

i think for the duration of the campaign it would help for your readers to treat both candidates with some measure of respect.

charlie dent is far from an "empty suit". on every occasion i discussed policy with him, he seems to be an extremely well-informed. he is conscientious and eager to hear your viewpoints even if he disagrees with you. he is an exceptional public servant.

siobhan bennett, for her part, is hardly the airheaded, unscrupulous floozy depicted on this and other blogs. would that she were. siobhan doesn't have nearly the grasp of public affairs that charlie dent has . . . but then dent didn't possess this skill either when he first ran for the legislature. lack of wisdom and insight is the hallmark of almost all challengers (read Obama)

we are looking at a potential "perfect storm" for the democratic candidates this year; she was smart enough to realize that at a time when other more prominent democrats were dodging phone calls from the house democratic campaign committee. and for that she deserves some credit.

regardless of what one may think of her POM salary, keep in mind that she did in fact start the program and worked on it for over a decade with no pay whatsoever.

there are plenty of important issues to discuss and plenty of differences of opinion between to keep this blog rockin'.

Thanks for the much needed perspective. You're right.

Unfortunately, tomorrow's posts are going to involve a lot of questions about Charlie Dent's personal finances. They were raised - they had to be asked.

On Wednesday, Dent's views on Iraq will be laid out to the reader. From that point forward, you'll see the differnces on many important issues.

It's tough to play fair on the blogs when Bennett does the things she does, or should I say, says the things she says (because she doesn't actually do anything.) That's my view anyway.

"we are looking at a potential "perfect storm" for the democratic candidates this year; she was smart enough to realize that at a time when other more prominent democrats were dodging phone calls from the house democratic campaign committee. and for that she deserves some credit."--Consigliere

Interesting point you bring up here. There was a post along that line about a year ago over at Keystone Politics. Here's the link.