If You Missed Musikfest, You Must Be a Big Oil Slave 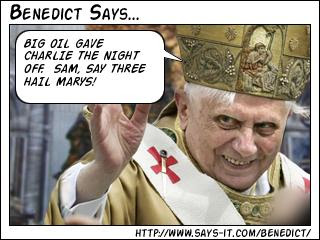 I'm a miserable bastard. It should come as no surprise, therefore, that I hate Musikfest. If I want to be packed in hot weather amongst hordes of sweaty people, standing in unending lines, I'll go to a refugee camp. At least the food there is free. Last night, I learned that those of us who skipped out on Musikfest are servants of Big Oil, too.
Pam Varkony, who attended Musikfest and is in the clear, tells us that congressional candidate Sam Bennett also attended the festival. Some of you may have gone to get tipsy or hang around with the Bill White cutout or get tipsy or pig out or get tipsy or listen to music, which is still played there. But congressional candidate Sam Bennett, who incidentally lives at the Historic Benner Home, went because Musikfest is a "catalyst for the revitalization of the city of Bethlehem" and "an economic boost for local businesses" and stuff like that. Oh yeah, she's a "Lehigh Valley leader," too.

Bennett claims Congressman Charlie Dent has to stay home in case Big Oil calls him to drive one of its tanker trucks or something. "[I]f an event won’t help him raise money or gain more pats on the back from Big Oil, he’s not interested,” says Bennett campaign manager Kathryn Seck, who was imported here from D.C. and doesn't even know how to do the chicken dance.

There's just one problem with Bennett's accusation - it's false. He's been there twice this year, standing in lines just like everyone else. According to his campaign maven, Shawn Millan, Charlie always goes to Musikfest. Big Oil must give him a few days off.

And if you waited on line for $5 beers, you were worshiping at the altar of Big Beer. I'm amused when inanimate things (oil, trans fat, businesses of every stripe) are made into bogeymen. I guess it deflects from the reality that humans make human decisions - sometimes not in other humans' best interests.

Musikfest has been around 25 years. Back then you took your family to Muikfest and went to free concerts by nationally known performers . You did not worry about being assaulted by every over agessive politico and their agents, the food was good and affordable, and the drunks were hustled away before they became obnoxious or obvious.

Progress has improved Musikfest . It is no longer local, it is now no longer free to see the headliners but rather even more expensive than an ticket in a concert hall.This year friends have complained to me about the drunks, the rude youths, the constant soliciting by political operatives and have wondered aloud about explaining to their preteen daughters the public urination and the "girl on girl action" under the main street bridge.

Is this the spotlight we want on Bethlehem?

The good old days of MF were better. It has gone totally commercial and the out of towners have ruined it for all of us. Too big for their britches! Just another excuse to get stupid and drunk!

Honestly, I don't see how people get these opinions of Musikfest. I am lucky enough to have a flexible work schedule, live in Bethlehem, and love live music, so I made it to the festival every night. A few of the free shows I saw were by nationally known performers, and many of the others were by bands no less worth listening to. In the 10 days I was there, I did not have a single person approach me with political literature or otherwise harass me. The food is overpriced, but still good if you know whom to buy from, at least. In any case, eating a big meal before coming out or bringing your own significantly lowers the temptation to spend money on it. There were certainly intoxicated people around, but I did not notice any of the negative effects of drunkenness such as fights or public urination. It is not free to see the headliners, and the River Place venue is really pretty bad, but it is certainly not more expensive than it would be to see them elsewhere. I saw Boston for $24, but would have to pay $55 for the same show when they come to Atlantic City on Friday. Earth, Wind, & Fire was $22 if I remember correctly, but are $55 at the Tower Theater in Philly and $39.75 at the Sovereign Center in Reading next month.

I can understand people that live in the downtown and do not attend the festival but are annoyed by the crowds of people, noise, and parking nightmare that it provides. But how someone can actually attend it and not realize how incredibly lucky we are to have such an event nearby is incomprehensible to me. I got 10 nights of great entertainment for $50 worth of tickets, $6 worth of trolley rides, and about $25 in snacks.

been around musikfest for around 25 years, started as site super at fest, after five years there helped develope danka platz into the corporate hospitality center that is used heavly today. left the board after 10 yrs. Musikfest is still one of the greatest music festivals in the country. The police do a great job with crowd control( yes there are intoxicated people) and it is a inconvience for the residents downtown, but, for the value of a ten day event, theres plenty of free music, good food and great friendships renewed every year. So if you can't stand it....stay away, but for us that enjoy it....keep up the good work.

Chad Hogg, I agree w/ you, I went 3 times this year, always enjoy it, and was not accosted by any politicians or other unsavory characters. It's a good time - and it's 1 of only 3 times / year I can get Take-A-Taco!

Anon 7:34, true it's $5 for a beer, but that's for a 22oz beer (assuming you have the mug - I have a classic 2003 mug that works just fine). The Musikfest price is about 2/3 the cost of an equivalent amount of beer at Ironpig stadium, and not that much more than the cost of beer at most bars in the Valley.

Even Musikfest is a political event for Sam. Look, after Mug full #3 of the night, the last thing I want to do is hear about "Big Oil." I love the 'Fest, I don't want to really see Charlie or Sam there.

I agree with Chad Hogg and not the miserable curmudgeons. My only complaint about Musikfest is the abysmal selection of performers year after year. Whoever is doing that job could do a much better job. I can see one or two retreads, but an entire festival of retreads?

BTW, I'm surprised I was not robo-called from the career politician Dent telling me that he attended Musikfest. He robo-calls me every other time...

hayshaker said...
BTW, I'm surprised I was not robo-called from the career politician Dent telling me that he attended Musikfest. He robo-calls me every other time...

Give it a rest.

Here's what I want to know from people who think like you.

If you see nothing at all decent about politicans, if you think they're all in it for the money -- what could you possibly think of someone like Bennett is a career wannabe?

What do you make of someone who has lost twice in her efforts to become a "career politician?"

Do you think she's doing it because of her love for all mankind?

Given her track record with her charity where she decided she was worth a third of all the money it takes in -- are you able to ascribe positive reasons for her desire to run for Congress?

Hey, I didn't give Charlie off. WTF?

Sam Bennett is incorrect... Charlie Dent did not stay home... I saw him the first night of Musikfest walking around the Main St. area.

Every time I went to Musikfest I enjoyed it. The food and drink prices are set at that price to pay for the performers who come from all over the world to entertain us at Musikfest. Some people go there all day and do not spend a penny. Others spend a lot$$$. That is what pays for the bands. I was very surprized that Bernie O'Hare would complain about it. I feel he should thank all the Musikfest volunteers who work hard for no pay. If it was not for them, everything would cost 5 times more. Thank you Henry Schaadt

so very disapointed last year with no trolley service absolutely loved that trolley ride all over upper and lower fest areas this is only one gals oppinion took all the fun out of it for me boohoo!!!!!! might go up during day used to do 12 hr marathons but now no trolley for transporting this gal up and down those hills!!!!!