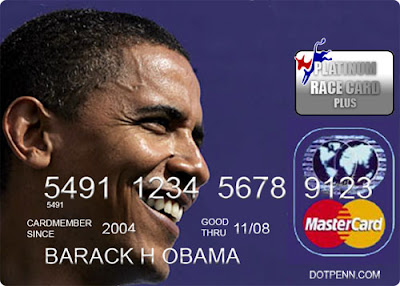 DotPenn, our source in central Pa., breaks the news that the Obama campaign and Mastercard have teamed up to produce the Race Card.

While the interest rate is set low for minorities, the rate for whites is charged at 21 percent, compounded over the last 352 years of oppression.

“It should be 360 years of oppression,” said [Obama spokesperson] Fontaine. “But we deducted the ten years we subjected white people to disco music. Then we added two more years that people of color were subjected to Vanilla Ice.”

I called the McCain camp for comment, but a recording tells me it's nappy time.

Black people got shortchanged again - only a 2yr add-back for Vanilla Ice? I'm offended by that and I'm white!

Do we get a free tire guage for signing up?

the card thats got your back ?

I get the Vanilla Ice thing, but the entire rap onslaught and Al Sharpton should really square things at this point. Can't we all just get along?

nsco, they offer a free weather vane to assist in determining Barack's positions as the wind blows.

I am offended by this racist card idea. This is a problem Mr. Obama must control. Racism comes in all colors. Enough is enough.
It is Obamam's race to lose.

From James Carville - "Pennsylvania is Philadelphia and Pittsburgh with Alabama in between."

I expect something like this from central PA, not Lehigh Valley Ramblings. I'm disappointed. And I do have a sense of humor. But this ain't funny.

You're the first person with that point of view. Lighten up, is all I can say. I'm leaning Obama and thought it was hilarious.

As for the use of a "race card," the serious point I'm making is that Obama did play the race card over the weekend. He claimed the McCain camp was criticizing him bc he is "different" and has a "funny name." But McCain's camp has tried to avoid doing that sort of thing and properly called Obama on the carpet.

Obama is a man, just like anyone else. There is a disturbing tendency among his supporters to deify him. Some of his posters are downright weird.

I thought this entirely appropriate, especially in light of the claims Obama made.

Bernie, I'm in your camp, I am white and work with many minorities, and everyone I talked to thought it was funny as hell, although I have to say most agreed with Anon 10:34am, the Vanilla Ice giveback was too light!

I am surprised as any, that I am having this conversation with you, of all people. Anon 5:12 was also offended. Anything that falsely divides the races is harmful, not a joke. Your use of the term "nappy" is no laughing matter either. It is a long term negative terminology that recently got Don Imus in trouble as well.

Excuse me, but are you out of your mind?

The "race card" is something that Obama actually played himself over the weekend, creating a false division between blacks and whites. He conjured up a McCain attack that was never made.

It's entirely appropriate to call Obama on it, and this "race card" does so in a humorous way.

You are looking for race issues that do not exist, creating the false division that you actually seek to prevent.

There are plenty of racist remarks and drawings out there. This is not one of them.

While we're on the subject of "false divisions," I suggest that your snark about expecting a racist remark from a central Pa. blog is itself a bigoted remark.

It's kinda' like expecting all blacks to be gangbangers.

As a person of color and proud Obama supporter, I see nothing offensive about this post. When I read "nappy," it never even dawned on me that this could be interpreted as a repeat of the Imus slur.

Where is the high-minded rage when you freak if someone utters a word you don't like. You scream sexist, bigot, racist.
Yet the premise of this thread is a very disturbing and bigoted topic.
This type of 'humor' will make wary whites go to McCain. Come on kids, this is the big leagues get your act together or Dem's lose again.
Bernie clean it up. Or is Angle not an anti-semite bigot?

Actually, idiotically silly reactions like yours are what is most likely to drive "whites" or anyone with a brain, to McCain.

Obama played the race card over the weekend. DotPenn's humorous take on the subject was perfect for this occasion. You can blame me for the "nappy" remark, and that has nothing to do with hair or Imus.

If I thought, for one second, that there is anything remortely racist or even insensitive about this post, I would never have run it. The only people complaining are overly sensitive Obamaphiles.

Bernie
Welcome to the conservative side of the aisle