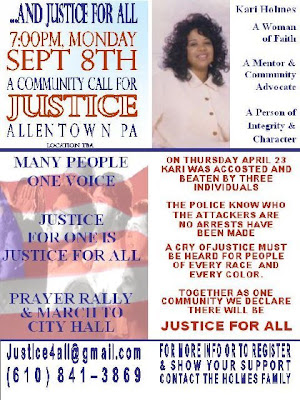 In late April, I told you a racially motivated assault reported by Allentonian Kari Holmes. Her mom, Dr. Karen Holmes, is pastor at Deliverance Evangelistic Church International. One month later, there was no arrest, even though police identified the attackers. Four months later, the story's the same. In fact, the victim has been asked to take a polygraph. Her statement is below.

"As you may already know, on Thursday, April 24, I was brutally assaulted by three individuals. I made a quick run to my area supermarket to buy a birthday cake and card for my brother and was on my way back home. Around the corner was a hate-filled group of individuals waiting for me. They were spewing out racial slurs and making vile gestures. They cornered me in a back lot and forced their way into my car through a faulty lock on my door. Screaming violent sexual threats and racial slurs, they drug me from my car, threatening to kill me, as they kicked and punched me repeatedly. At one point, I looked up and saw the male driver go to his car and pull out a long white pole-looking object. I began to fight the woman off who was beating me with everything I had before the man could get any closer. Eventually they all fled. Bloody and gasping for air, I climbed back into my car and somehow made it home. My mother thought I had been in an automobile accident. I could barely breathe enough to tell her what happened. The police were called immediately, dispatched an officer to my home, and we turned the page on what has now become another nightmare.

"The APD proposed that I submit to a polygraph, which is highly unheard of that a victim of a violent assault be requested to do so. Even with the audacity of the request, I intended to comply, but a lawyer intervened and suggested further counsel. The evils of prejudice, racial biases and hate manifested themselves repeatedly, and in some very unexpected paces. But our voices calling for justice can be louder and stronger. When I shared with many of you that the attackers corroborated a story saying I chased them, you forwarded letter after letter, from PA all the way to GA confirming my character, truthfulness, and integrity. These notarized letters have aided in further proving that the attackers accusations can be nothing more than a corroborated lie to defend their barbaric actions and stand in strong contrast to the APD's questioning my credibility. [Please continue to furnish these letters, as the difference is made when more people speak up]."
Posted by Bernie O'Hare at 8/27/2008 12:40:00 AM

So what does Allentown CSI say? Get Grissom on the Case!

I can't believe that arrests were never made. They keep throwing Kari Holmes under the bus, time and time again.

Perhaps after a polygraph test they can take blood to make sure she didn't take a truth-creating pill. Then, as outrageous at it may seem, a DNA test to make sure she's not the evil twin from planet Angwar.

Get with the times already! A hate crime was committed and nobody wants to admit it.


F'n (sorry, i'm annoyed w/ this) Lehigh County and APD can't get w/ IT!!! She was attacked. Her physical person was harmed in the name of racism/prejudice and pure ignorance! The APD and LCDA's office don't get it.

Something is not right when we live in a country, state, county, city and cannot expect justice to be done by our elected officials. Straight up BS!

Complacency kills! Send troops to Darfur! Sorry, that's one of the bumper stickers on my car.

However the idea is the same. If you do not prosecute those who commit crimes, you may as well encourage it.

One must wonder, if she were white and her attackers were black/latino/chinese..anything but white..would their course of action be the same?

Hmmm... Why do you think, when it was such an unusual request that was certain to be labeled incompetence or racism, that she was asked to take a polygraph? Couldn't be more to the story, right? Anyone remember Tawana Brawley?

I suspect there is more to this story. This is a police department that has a very poor track record when it comes to treatment of minorities.

Bernie, I agree w/ you and I'm curious what the rest of the story here is too.

This just does not make any sense to me.

Mr. O'Hare has ruled only agreement is allowed!

Do I smell a public rally at City Hall?

I too would like to hear the facts regarding this incident.Are not the A.P.D. reports a matter of public record.I would also think Ms. Holmes would obtain these reports and post them.

The APD report is nothing more than a repeat of what Ms. Holmes said. if you read my earlier posts, you'll note that originally, the police could not locate it. Also, the officer who came to talk to her behaved unprofessionally.

From my understanding, the APD report is actually a repeat of what the original investigating officer decided to report. It is also my understanding that to this day, the report still does not reflect an accurate account of what Kari reported.

Things that make you go hmmm.