The Charlie Dent Interview: "My Job is to Work With People" 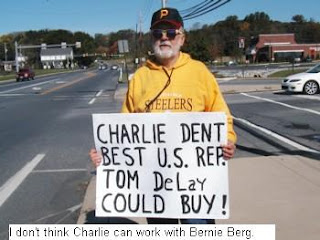 I'm a Democrat who likes and supports Lehigh Valley Congressman Charlie Dent. I first met him two years ago, when he was facing Charles Dertinger. Believe it or not, I was actually leaning Dertinger. Dent reached out to me. I saw his strongest quality - an ability to work with very different people - first hand.

I ended up voting for Charlie.
Now, two years later, Dent faces yet another weak candidate, Siobhan Bennett. Congressman Dent allowed me to pepper him with question after question, even permitting me to record his answers. Over the next week, I'll be posting his responses verbatim.

In the first installment, Dent explains how he and Bennett are different. Let's go right to the interview.

LV Ramblings: Ms. Bennett's campaign talks a lot about needing change and facing big changes in the future. Bennett likes to call you a "career politician" [Charlie starts laughing] while she is a "change agent who's been doin' it for years here in the 15th." She even claims she goes to church more often than you. [Charlie suddenly gets very erect]. Your detractors call you an "empty suit." Do you think Bennett is really a "change agent"?

Congressman Dent: "No. Siobhan Bennett is a career candidate. People are learning about her extraordinary hypocrisy. She sends me a 'clean campaign' pledge after she lays into me with personal, unfounded attacks. Here she is, saying that she goes to church more often than I do. These are personal comments she's making . . ."

LV Ramblings: She said that on a local radio program . . .

Congressman Dent: "She is making personal comments about me. She has a lot of nerve, frankly, to do that, but I'm not at all surprised.

"With respect to the 'change agent,' the only change Siobhan will bring to anyone will be the change left in their pockets after she's done taxing you and trying to regulate your life and to litigate this nation into what she believes will be a prosperous future.

"That said, let's talk about people who can get things done. I'm not trying to blow my own horn, but I feel like I have to state this . . ."

LV Ramblings: This will actually answer the next question posed by my readers - How has your time in office qualified you to represent us again? How have you made yourself an effective and experienced Congressman, one who can make a difference for his constituents?

Congressman Dent: "Yes, I think one question leads into the next. People in Washington know they can work with me on both sides of the aisle. Pete Peterson of the Peterson Foundation and Dave Walker, the former Comptroller General? I set up a meeting between those guys, our group, the Tuesday group, a group of more centered Republicans, and the Blue Dog Democrats. We talked about entitlement reform.

"Mr. Peterson was quite clear. He said if anything is going to happen, we're going to need this group. This is one of the biggest and most difficult issues this nation is ever going to face - the nation's entitlement system - and Peterson said that's why we came to you.

"In contrast, Siobhan Bennett is nothing but an extreme partisan. I've never seen her try to reach out to anybody on the other side of the aisle. She doesn't do that. That's not her thing. She has always identified herself with the more extreme elements of this left wing movement, whether it's MoveOn.org, ACT [Americans Coming Together] or George Soros or whatever it's called now. They change the name. Every time they get in trouble, they change the name. That's where she's been.

"I can point to areas where I've worked across the aisle. In stem cell research, I worked with [Democrat] Diane DeGette of Colorado. We partnered a group to put together a coalition both when I was in the majority and when I was in the minority. We did this twice, never with enough votes to override the President, but we tried. We worked collaboratively. They know they can talk to me.

"I voted to override the President on SCHIP. I sat in on meetings with [Democrat] Rahm Emanuel, talking about how to get the votes needed to enact a responsible SCHIP program. I sat in serious policy discussions and people feel they can talk to me.

"On the Homeland Security Committee, I work closely with Democratic subcommittee chair Henry Cuellar of Texas. He's been to my district; I've been to his. I've introduced legislation; we've moved my legislation through the House, and I'm from the Minority. I've still been able to move legislation.

LV Ramblings: Plus you've brought home quite a bit of money . . .

Congressman Dent: "Yes, another thing, too. We're going to be getting into Iraq and other issues, but I was one of the first members of Congress to call for a Status of Forces Agreement, along with [Democratic] Congressman Steve Israel of New York. In fact, it was the first time that any members of Congress went to the House floor together to talk about Iraq in a civil tone . . . to talk about areas where we agree. We talked about this for over an hour. Some of the media picked up on this because they said they never saw this before. They see these rancorous special orders at night. Frankly, Steve Israel and I did it because we felt that C-Span was no longer safe for children. We decided we'd have a civil conversation.

"Now, you're seeing a status of forces agreement that we were talking about a long time ago to put some pressure on the Bush administration to move in that direction.

"There are issues like that that we work together on all the time.

"I also work all the time with local officials, from Mayor Fluck in Hellertown to John Callahan in Bethlehem. He gave me a lot of credit when we helped get some money for the 412 improvements, $15 million that was the city's top priority and a top regional priority. He made some very kind statements about me that really meant a lot to me. 'Whoever thinks Charlie Dent can't get the job done, hasn't met Charlie Dent.' Something to that effect. I should apologize to the mayor now. He doesn't like it when I bring that up.

"I've worked with the Mayor of Allentown, too, and he thanks me publicly for working with them to help get some funding back to the police department and some of the city's other infrastrtucture.

"I work together with others all the time in larger and smaller communities. I've worked with John Stoffa for a Child Advocacy Center, which he helped establish in Lehigh County when he was the Human Services Director. Now he's trying to establish one here in Northampton and it will happen, too. We helped provide some of the funding.

"We don't ask questions of party. We have a job to do and my job is to work with people. I think I've done that, both in Washington and back here.

Bernie, I'm glad you waited for the tape. Reading Charlie in his own words is quite interesting. I look forward to seeing all the installments. Keep up the great work!

If this is good, it is because of the subject.

Bernie Berg is a perfect example of the dangers of a Jesuit education.

So am I. (Georgetown). So is Billy Givens. We're all nutz!

While Dent is head and shoulders above his opponent in this election, the choice for Republicans is much like having to settle for McCain in the Presidential. The interview is telling in that he takes so much pride in acting like his opposition (bringing home money, bucking his party's position on so many issues). I for one, am not interested in hearing how he delivers money. How can that be a strength for him, but a hammer used by his Party against Democrats? This is the hypocrisy that Conservatives are forced to live with in today's Republican party.

While I will not vote for her, Bennett is right about one thing:

Charlie Dent is a career politician, and his "Moderate Republicanism" is simply a route to pleasing as many people as possible so he maximize his chances to stay in office.

Anonymous 8:41PM
Let's keep in mind that Bernie is also an Annapolis grad and you and I paid for that.

Chris, So far as I know, neither Bernie (Berg or O'H) is an Annapolis grad.

Anonymous 8:44AM
Dent and others believe it is their obligation to get as much money for the home front as they can. This, unfortunately, has been the practice for a very long time. Keep in mind that the Feds have become involved in too many things in our lives. Many times that has been at the request of the people or their local and state representatives. Until we the people convince the Feds to stay out of local and state matters we will continue to see earmarks or pork if you prefer.
I see really only one way to do this and that is term limits on elected positions at all levels of government. Congressmen like Dent should be allowed three terms in the House and should not be allowed to then migrate to the Senate to continue his governmental career. If he wants to come back home and run for mayor of Allentown for two terms so be it. In addition the House term should be extended to three years so they are not working one year and running for re-election the next year.
We need to get the long time local officials out of office so that new blood, ideas and methods come into office for training for upper offices. Why can some guy serve for 6 years as a township supervisor and an unlimited number of terms. We need fresh bodies at all levels of government to bring new ideas into office. Our Founding Fathers did not intend for politics to be a profession. Franklin did not even want to pay them.
The tricky part is getting the Congress to write the appropriate amendment. Why should they do it since they will be adversely affected? If your rep does not support said amendment you will have to replace them.

Bernie
Mr. Berg noted is graduation from Annapolis in a letter to the editor at the Express-Times I beleive sometime in 2007 or 2008.

I will have to ask him. Bernie is a former priest who was in the seminary.

Bernie
Keep me posted on Berg. He made a comment about protecting the seas. Did he actually take all vows and serve as a priest?

Get the wooden stakes out! It is a pretty motley crew. The pope should have banished the order when he had the chance.

I'm glad Charlie has brought money back to the Valley.

Sadly, the money should never have left the Valley in the first place.