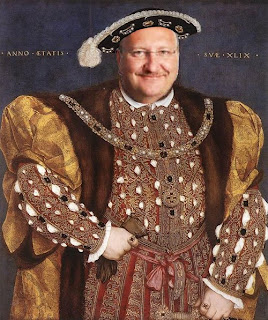 Young, affable and down-to-earth, Allentown city council prez Michael D'Amore would be a perfect usurper to King Ed's throne. Since Democratic Talk Radio Blog reports Mike is planning a $35/head fundraiser on August 21 (Here's a link to the details), I started wondering ... .
D'Amore presided over last week's bullshit burger bonanza, where King Ed wore down resistance to his police plan with long-winded answers to simple questions. Although I ran out of there screaming long before the meeting was over, the King of Renaissance Square actually lashed out at D'Amore during one of his lengthy soliloquies. Amazingly, Allentown's supposedly Democratic mayor thinks D'Amore is too union friendly. Few noticed the tirade. Most of the audience were sawing logs.

"I'm not running for mayor," Mike told me last night. He explains his fundraiser as a necessary precaution for potential adversaries in next year's city council race. Gee, now who would run a candidate trying to dump D'Amore? Hmmm.

"I've been encouraging him to run" is what city council VP Tony Phillips, himself a potential contender, tells me. "It wouldn't be Chicago politics as usual."

"With Ed all we have are window displays. Once you get behind the curtains, you find it's empty."

pawlowski is a smuck!

A series of increasingly disagreeable, sexist and taunting posts by Bill Villa has been deleted. If he wants to attack people, he can do it from his wife's blog or on the MC reader forum.

Commenting here is a privilege, not a right.

Hey,Looney from the boonies. 19 comments ,2 of your own and 1 from your butt buddy Molovinsky( 1 of your fellow gripers and snipers) and a large sampling of personal disdain for you and your conduct. Do you get the feeling that maybe you are a bit out of touch and that people genuinely dislike you. That was the MSM response to you and your "wit". Where are all your supporters Whack job. You dont have a following and people dont give a shit what you've got to say. To sum it up you are an "insignificant malcontent". Please let me know when you are ready to concede. Every other observation on my original post stands and remains deadly accurate.
Also, you never provided the qoute where I made disparaging remarks about Wendy. Could it be that there is no such quote. Yellow journalism, redbaiting, half-truths, I cant figure out why the whole Lehigh Valley rejects you and and your blog "EMPIRE". You are such a LOSER. Come and get me!

What I have learned is that Ed DeGrace is a very sick person who will be an embarrassment to any person with whom he is assoicated.

Thanks,I'll take that as a concession! All those threats from King Bloggo,The Looney from the Boonies and now you bow out like a wuss. I didnt even work up a sweat Bernie,LOSER!