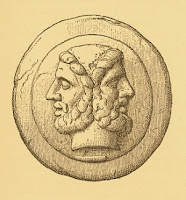 According to The Express Times and Morning Call, Northampton County has hired Bethlehem resident Richard Janus to act as its "economic development administrator." He apparently was the unanimous choice of unnamed local business leaders, and will be paid a salary of $47,270.

That's about $10,000 less than Janus was making as Beaver Falls city manager. Unhappy with his performance, city leaders asked him to resign in December, offering him three months' salary as a severance package. Janus accepted the deal, then promptly filed for unemployment.

In Roman mythology, Janus is the two-faced god of new beginnings.

That's a real drop in pay considering the cost of living out here is much higher. Beaver Falls is one of those really depressed former industrial towns in the Ohio River Valley area of Western PA. I'd sure like to know how a guy who got fired from a depressed little borough from Beaver County wound up administering economic development out here.

An interesting exerpt from an article from in the 12/10/07 Elwood City Ledger:

"Janus may have hastened his departure by slipping a 9 percent raise for himself into the city's 2008 preliminary budget. Other department heads' raises are either 2 percent or 3 percent.

"When asked whether this was an act of self-sabotage, Boak nodded affirmatively but did not speak. Boak suggested council would never have approved the proposed raise, from $57,000 to $62,130.

It appears that Janus actually resigned after two years and accepted a $14,250 severance package, then he turned around and filed for unemployment compensation. The Borough contested this and after a hearing on the matter, the PA L&I determined that the borough would have to give him an additional $28,000 in unemployment compensation even though he tendered a resignation and accepted a severance deal.

If forced to resign or fired, Jnaus would be entitles to unemployment unless there was willful misconduct.

Big deal Northampton County hired Conklin at one rate thwn really jumped up his pay as per a Stoffa promise.
Check out that.

Yeah, how is it that one year Conklin is making ~70k and the next year is making 90K? How does that happen? Other county emplyees have been living with the normal 4.5% step increase.

Conklin is an operationals expert who quietly does his job and avoids the politicos. He deserves every penny paid to him. In fact, he probably deserves a combat pay allowance for all the mean-spirited shots delivered by Dertinger & McClure.

What was done for Conklin was a disgrace and disservice to other employees and the public.
Of course since it was done by Stoffa, O'Hare covers for it and makes a joke out of it.