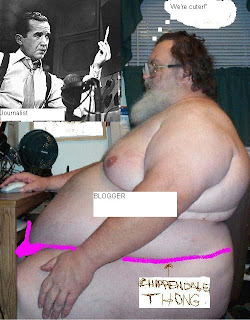 I don't know if any of you have actually ever met Glenn Kranzley. He's the Morning Call's opinion pages editor. I had breakfast with him once. He's got this big beard that makes him look real serious like he's a professor or something. And if truth be told, he is a very thoughtful and gentle man. But I'll let you in on his dirty little secret.

Since the academic world is mostly vegan, Glenn is stuck in the newspaper business, where carnivores eat politicians for breakfast.

They taste like scrapple.
Facial hair is quite the rage at this paper. Columnist Bill ("the love doctor") White sports a little goatee, probably to drive the ladies mad. Paul ("I don't need no steenkin' helmets") Carpenter, of course, is a manly handlebar moustache type These are the elites of local journalism - at the top of their game. But if you're an indie blogger like me, they are the enemy - corporate slaves, establishment press, yada, yada, yada. They may prey on pols, but only those sanctioned by their entrepreneurial sponsors.

Blogging is my passion - I love to write, am so opinionated I actually argue with myself and can only get one letter to the editor published every month no matter how many false names I use.

What's a blog? Technically, it's a web log, a diary in reverse chronological order. In the Lehigh Valley, there are over fifty. Most, like Keystone Politics or Pamela Varkony's Perspectives, are political. But there's something for everyone. Want a restaurant review? Check out Beyond Scrapple - LV Ethnic Foods. Need a laugh? Look in The Junk Drawer or Dot Penn.

In contrast to journalists, we present raw and unfiltered information. Read us at your own risk. We have no editors, and in some cases, no ethics. But Blogistan is a meritocracy. The cream rises to the top while the bad ones disappear pretty quickly.

We polibloggers are the most dangerous, preying on everyone, including each other. We taste like scrapple, too.

Bloggers and mainstream have serious disagreements. For example, I'm appalled by the disgusting hate speech at The Morning Call Reader Forum. I was horrified by a corporate decision to lay off reporters at a paper that still turns a profit. But we're no replacement. A recent study does show an increasing number of people (59%) consider blogging a significant source of information, but most of us (87%) still readily concede the importance of professional journalists.

Instead of competing with the mainstream, we actually complement them and each other. We'll often focus on a particular topic (LV Black News Network) or a specific geographical location (News Over Coffee: Nazareth News). A newspaper, which has a larger and more diverse audience, is simply unable to do this. Another advantage is real time interactivity. I exchange comments with readers on a regular basis, something the papers are reluctant to do. If I'm wrong about something, and I often am, my readers gobble me up pretty quickly.

When are we at our best? For poliblogs, it's election time, baby. That's when newspapers head for the hills. Candidates are encouraged to buy ads or have supporters send letters to the editor that may or may not get published. Scant coverage really hurts poorly funded candidates. Incumbents and well-funded candidates win the day. Once the election's over, the mainstream media will emerge from their bunkers and charge us with voter apathy.

That's a crock. Bloggers always have a big jump in daily readership at election time. That's actually when readers are most hungry, and not for scrapple.

Last election cycle, things began to change. I was covering all the mudslinging in the Northampton County municipal races. Real pros like Bill White, Joe Nixon, Sarah Cassi and the editorial board at both local papers joined in the fun. I then posted Northampton County Council campaign finance reports online, something that local government only makes available in their offices. People just devoured them, noticing names and connections that I would have missed. Blogs, readers and both local papers presented a better picture of the issues and people running for office. Befuddled incumbents actually began filing 24 hour reports, something they had never done before. This improved coverage made a big difference.

Not everyone likes that. Northampton County Dem boss Joe Long had a hissy fit when John Stoffa once let me tag along to a news conference. Mayor Pawlowski's office refuses to return my calls. Maybe I should invite him to lunch and promise to tip the waitress.

But for every pol who looks down his nose at us, there's another who views us as another way to communicate with constituents. Many elected officials - Congressman Charlie Dent, Lehigh County Exec Don Cunningham, Easton Mayor Sal Panto, DA John Morganelli and Commissioner Browning - routinely include us in their news releases. Panto's first post-election interview was with a blog, Easton Undressed. In fact, three local blogs - Inclusion (Mike Donovan), The Tatamy PA Blog (Chris Moren) and LV Throwdown (Julian Stolz)- are published by elected officials.

The people who've been nicest to us? Reporters. It's clearly an accident, but we somehow make the mainstream better and more responsive. That's why, nearly a year ago, Glenn Kranzley decided he wanted to link to some Lehigh Valley blogs.

In a few short weeks, Blogger Tuesday has already had an impact. Michael Molovinsky's post about deplorable conditions at Fairview Cemetary resulted in a news story and a meeting with the owner. Instead of banging his head up against a tombstone, he made a difference.

That's why most of us write - to make a difference. Blogger Tuesday gives us an opportunity to do that while spicing up the standard fare at The Morning Call.

In fact, three local blogs are published by elected officials

That's why most of us write - to make a difference.

And because some of us are bad at math...

ajc... that was funny

I just realized this morning, on my big 4-0 birthday, that we'd hit the 'big time'.

I know you can live up to it; let's see how I do, though!

Great blog, BH. I only worry that the Mcall's great idea to use the blogosphere is in a way, a type of exploitation, meaning, they will only pick and choose what THEY feel is important and maybe even use it in a way that misconstrues a certain topic or idea.

Could one incorporate a quantity bones into scrapple? If so, I am very much interested in a recipe.

ANYTHING that can be ground into a paste can go into scrapple - it's the beauty of it, you never know what the next bite contains - and yes, I eat scrapple.

The Blogosphere is the global town crier (sp?) - not the town whiner.
Blogs express interests and concerns of little people that big government and big corporations (newspapers)can easily ignore. A poll is not a poll anymore, it needs comment. etc.

And yes, even politicos are entitled to their little slice of the private, street corner, opinion thing but they are not as interesting as the trully dedicated private citizen.

(and) I love scrapple, though it don't taste as good as I remember it as a kid.

My apologies. I'll make a correction.

Happy 40th! I agree w/ Alfonso. It's all downhill now.

Scrapple may not be quite as bad as haggus, but it's bad.

I will not participate in your nefarious scheme to grind up A-liker and The Player into a tasty treat.

Bernie, agreed - I wasn't kidding when I posted. A friend of mine is a butcher, he told me what goes into scrapple and it took me a year to eat another piece.

it took me a year to eat another piece.

All I had to do was try it once and that was enough for me!

silly me... I still eat the stuff.

I'll pray for you.

Blogs are no better than the paper. Blogs promote some issues and hide others.
This blog is an example of how a Blog is not an effective source of information but more a vehicle for someone to stroke their ego.
O'Hare pushes his opinions and calls them facts when he likes them and lies or OT when he does not.
The MSM has its problems but if you think Blogs like this are the democratic truth gatering solution, pass the big red flag comrade.

I like your description of blogs as local town crier.

Comrade, you're OT and lying. Now excuse me while I go stroke my ego.

Would you please stop posting pictures of me!

I too like the idea of comparing blogs to a town crier. But I would take it a step further. Blogs are like the newspapers of old.

There used to be a number of papers in any city or town. They tended to actually be partisan! And they competed with each other and actually had different opinions. None of this sanitized, phony, "objective" stuff claimed by today's media.

I think our democracy was much healthier then. However, today, blogs and the internet in general are improving things immensely.

In fact, I read many blogs and postings by the "other side". It is amazing how much we can agree with. Jefferson was correct. We can ALWAYS rely on the wisdom of the 'common' person if they have the facts.