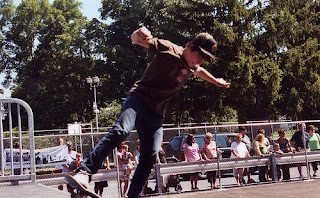 When Nazareth's skate park opened last July, it did so amidst all sorts of controversy from worried adults. Let's face it. With their bizarre language, dress and style, skateboarders are anti-establishment. We love to see our kids in those Little League uniforms, but turn our noses up at the very sight of kids with bulky trousers and caps turned sideways. We fail to understand that skateboarding, like baseball or football, is actually an athletic activity.
No sooner had the skate park opened than one overzealous borough councilman decided to shut it down, citing nonexistent safety concerns. That silliness only lasted a few hours, but it was long enough for Channel 69 to shoot news video of the controversy, complete with a car spray painted to say, "Open the park."

Worried borough officials gave park manager Heather Coyle a raise for her "extra responsibility," and even supplied her with binoculars so she could spy on the kids from the bathhouse at the pool, where she spends most of her time.

Over the past year, the place is packed every day. It is cleaned by the users. There have been just two problems. An angry father once demanded Coyle to eject skaters sitting on a pipe, preventing others from skating. Turns out his son was one of the obstructionists. The other incident is a broken ankle.

Despite all those concerns by adults who prefer to see kids in shoulder pads, breaking bones and hurting each other, the skate park has been a smashung success.
Photo Credit: Steven Mikolaitis
Posted by Bernie O'Hare at 8/09/2008 10:41:00 AM

I am very happy that the kids who were on the street with no place to go but be chased by police and complainers have the park. It was about time when it was built and it continues to be a great decision!

Yep, I'm very pleased by how much use it gets, how few problems there are and how well it is maintained.

And now, it's Nazareth's turn for a dog park! I've even volunteered to help clean up this place. As most of you know, I'm an expert at shoveling shit.

Sure, and it will be a success until the first kid leaves his face on the pavement and his parents sue the borough- and it won't matter that the kid was stupid ( a skater, after all) his parents were stupid ( for allowing such idiotic activity)- the borough is where the money is AND was stupid enough to allow the unlimited liability of this place to become reality.