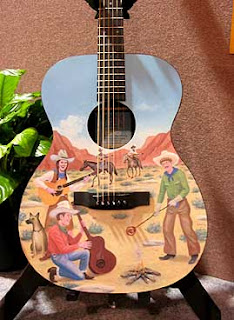 I couldn't help it.

I kept going back and back to Nazareth's little Musikfest on Saturday, conducted in honor of Martin Guitar's 175th anniversary. Main Street traffic was blocked so people could promenade up and down the street. That was bad news for businesses like Nazareth Hardware and the Army Navy. Not too many artsy-fartsy types frequent those establishments, excepting, of course, me. I told those shopkeepers they should sell bongs, lighters and cigarette wrappers on days like that. I just winked at the florist.

They could make a killing!
Kate's Main St. Garden Cafe had the right idea. She and the new Bistro, located right across the street, threw up a bunch of tables. Kate's a killer chef, and decided to make Martin Guitar cookies. Too pretty to eat. Unfortunately for me, now everyone will know just how good Kate's food tastes. I was hoping to keep that a secret.

I had breakfast at the Bistro and dinner at Kate's. The Bistro is good, but nobody tops Kate. She has all kinds of loose-leaf teas, for one thing. Where the hell else do you find that? Exotic salads, quirky sandwiches and art displays always grace her little restaurant.

The Express Times has a branch office located smack dab in the middle of all the festivities. I was sure a dunk tank would be set up for Editor Joe Owens, but he apparently is still too busy hunting bears in his back yard.

Throughout the day, I walked my grandson's five pound terrier throughout the Nazareth wilds, looking for marauding bears. But we'd faithfully return to little Musikfest every hour between noon and nine. She ate scrambled eggs, MORAVIAN SUGAR CAKE, a sausage and peppers sandwich, a fruit cup, an entire vanilla ice cream cone, MORAVIAN SUGAR CAKE, a pastie and a salad with Mandarin oranges and almonds.

Today, the little mutt weighed in at fifty pounds and is constipated. She keeps giving me this strange look, like it's my fault or something.

"Hey, I didn't force you to make a pig out of yourself!"

The best part, of course, was the music. All sorts of local (and not so local) musicians dropped by to play their music and sing. "Musician chairs" were set up all over the place, and they'd just sit down and start jamming. An Elvis impersonator dropped by and ate almost all of the MORAVIAN SUGAR CAKE.

"Thank you, thank you very much."

As the sun slowly set, some of the ladies started swaying. Hot mamas. I decided to try my luck with a few.

It was right around that time that I met three Nazareth cops, who were walking up and down the street all day, smiling and waving hello to people. Yep, there's a new sheriff in town.

Ross Nunamaker, the second most famous blogger in Nazareth, will get the papers in the mail. I hope his wife is not too upset.

Martin Guitar proudly displayed some of its best work. People were even allowed to touch! They could play and get the feel of a really good guitar.

That feel is slippery.

That's when I saw the three Nazareth cops for a second time. I hope Ross' wife is not too upset.

I then saw my good friend, Nazareth Borough Councilman Jack Herbst. Funny thing. He must have changed his phone number or something because he hasn't returned my calls for the past two years.

The second he saw me, he started moving. Unfortunately, he must have been mixed up about where I was located, because he kept going the other way, no matter how much I shouted. Finally, I unleashed my hound. She brought him down pretty quickly.

"So what's up with that dog park, Jack? Is it on or off? I'm getting pretty damn tired of having my grandson's dog dump all over Larry Stoudt's back yard every weekend. That ol' geezer nearly nailed me last night. I think he has night vision goggles or something."

"Dogpark by Fall, Bernie." Then he hopped on his skateboard and took off.

At the end of the celebration, a guitar was even raffled off.

It was a great little festival. I did save a piece of MORAVIAN SUGAR CAKE for Kathy at The Junk Drawer Blog, but the dog ate it.

If you missed it, you missed a good one. I hope we have one for Martin Guitar's 176th anniversary, too. Right now, a gazillion people are standing in ridiculous lines in Bethlehem to buy tickets so they can stand in another ridiculous line to buy a flat soda for $100. I like the small town festivals and picnics. I'm told Coplay had one on Sunday that drew 3,000 people. And they sell home made pierogies, too.

An hour after Nazareth's festival was over, the streetcleaners were out. By Sunday morning, Main Street was sparkling. That's Nazareth. That's most of the Lehigh Valley's small towns.

It was very cool.

I came, I dined alfresco at Kate's, I heard outstanding music played by outstanding musicians, and thought it was one of the coolest outdoor events I'd attended in this area. Music is part of the industry in Nazareth, and it was great to see the tremendous turnout. Bethlehem and Musikfest ain't got a thing on Nazzy.

I still have your grandson's dog's teeth marks on my leg. Used to be able to out run them...getting older I guess. You should be hearing from my lawyer shortly. Thanks for the Jackapoo info. I even tried the $18,000 guitar....funny though it sounded as good as the $5.00 one I have at home. Maybe it's me! It sure was a nice event...Musikfest like the olden days!

A million thanks to the folks of Nazareth who hosted that event. What a great day it was! Do it again in style in 2009! I'll be there again.

My wife and I had lunch at Kate's and enjoyed her Martin cookies too!

We had a great time at Nazareth and sure look forward to come back once.

Oh, and I enjoyed the two sisters playing on the street with their original 50's and 60's Martin!

Jan - from The Netherlands

Wow! So nice to hear from someone in The Netherlands.

I will pass your compliments along to Kate, where I eat breajfast very often. I know that will warm her heart on a snowy and cold winter day.

For my wife Kim and I, it was our first time to attend, but it won't be our last. It was an honor, a priviledge and a joy to be part of it.

At one point, Kim said to me,"Nazareth is such a nice little town." Later, we both understood how much of an understatement that was. Everyone...the vendors, the police, the factory workers and the guests were amazing.