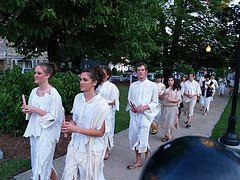 Two summers ago, Insomniak Theatre Company made its Nazareth debut with a modern rendition of Oedipus Rex at the park's amphitheatre, performed under the stars. Oedipus made a grand entrance in a military Hummer. The "priest" was a Channel 96 reporter.
Following that performance and a daylong "Greek Festival" for children, Insomniak thespians began work on an ambitious plan to acquire Nazareth's old municipal building (itself an old firehouse). Plans were drawn and a model was built, showing a small theatre with an art gallery at the entrance. Eric Honsel, Matt Meckes and James Buskirk, the Nazareth triumvirate behind Insomniak, approached contractors who agreed to make the necessary renovations at reduced rates.

Insomniak also joined the newly formed Nazareth Downtown Association (NDA), which kept the vision of converting the old municipal building onto a small arts center. It even formed some kind of arts commission, which has a rent-free lease to this empty firehouse. But about a year ago, Insomniak drifted away from NDA. Production manager and co-owner Erik Honsel tells us why. "'Backroom politics,' some narrow minded leadership, lack of support for Insomniak's input, and on one occasion, a hostile environment, were our reasons to withdraw support."

Friction obviously existed between Insomniak, on one side, and Ken and Karen Trionfo, who appear to be all that's left at NDA. That's another story.

As NDA lost members and volunteers, Insomniac kept plugging away, trying to find a home in Nazareth. Honsel, who is also a Nazareth teacher and member of the Nazareth Heritage Society, explains: "I firmly believe that strong arts programs equals strong communities. Besides the entertainment value, the arts can bring people together; the arts can make people aware of social issues; the arts can educate, illuminate and motivate. It is proven from town after town across our country that 'arts venues' and community oriented theatre groups generate income for surrounding and supporting businesses; towns have the potential to thrive in a strong performing arts environment."

Insomniak has finally found a home at the Nazareth News Agency, which has been empty since January. Instead of remaining empty, this nonprofit is already planning a play in September.
Photo Credit: Matt Meckes, Flickr
Posted by Bernie O'Hare at 8/15/2008 01:10:00 AM

THANK GOD. Something worth while is going into that empty storefront. This is great for the downtown. And great that Insomniak found a Nazareth-based home.

An inversion of Channel 69.

BO, there are many great wineries in the greater Lehigh Valley. It would be great to see a post on those. And, yes you can spit it out.

You could submit a post. I can't tour wineries. And I can't spit it out. That's the problem w/ me.

I am glad Insomniak found a permanent home. They would not have been welcomed back as they had worn out their welcome at several places where they had hosted events in the past.

Good luck and good riddance. I am sure they will be whining about something in no time.

Anon 1:17,
After your comment, I met the three gentlemen who run Insomniak. They assure me that wherever they played, they were very welcome.