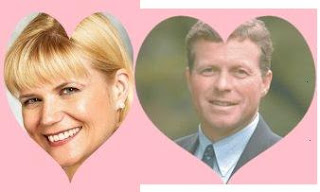 It's not quite Labor Day, but as the Morning Call's Darryl Isherwood has noticed, we already need hip boots in the contentious congressional race between incumbent Charlie Dent and challenger Siobhan Bennett.

In apparent reaction to Isherwood's 'tsk 'tsk, both camps decided to be sunny in yesterday's Battle of the News Releases. The Bennett bunker issued a statement claiming she would watch last night's Democratic convention with "hundreds of Lehigh Valley voters." Must be one damn big TV. She's calling for unity.

Not to be outdone, Dent's denizens declared that the six hundred member Le-Hampton FOP has endorsed his re-election. He's committed to law enforcement. I wonder if he got a badge.

Here's the problem with positive campaigns.

in an odd way, i think a subdued campaign works for bennett. there is a big democratic and new voter turnout pending; when you take the spotlight off her, it is easier for these voters to feel comfortable just pulling her lever.

It also doesn't help that her campaign Web site is full of lies.

You are the man! or the woman as the case may be.

To Whom It May Concern: comments 6:42pm and 10:41pm appear to be plants, that is, they seem to have been been posted by someone other than the two people the deceptive poster wants you to believe posted them ...

You are both wrong. I am the Man.