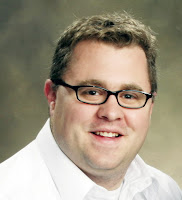 Barack Obama's selection of U.S. Senator Joe Biden as running mate is very welcome news to Northampton County Controller Steve Barron. You see, Steve knows him. If you walk into Steve's office, you'll see the photographic evidence, too. Inscribed on one of these pictures, in Biden's handwriting, is this nice remark. "Thank you for all your help. You were an asset to our Senate office."
Steve worked for Biden. As a 1995 college freshman, Steve met Pennsylvania's third senator for the first time, and came away mesmerized. "Meeting him instilled a lot of values in me." One year later, Steve wrangled an internship in Biden's office. He returned in 1998 for a second stint as a college junior. In 2002, when acting as controller for the Delaware State Democratic Party, Steve worked again with Biden, raising funds for Democratic candidates.

What values did Biden instill in our county controller? As Steve tells the tale, Biden likes to say that every day, when he gets up, he puts his two feet on the ground and says, "Today, I'm going to make a difference in somebody's life." Instead of pushing himself, "He's always looking out for the little guy."

As Senators advance in seniority, they can advance closer and closer to the front. Elected in 1972, you'd think Biden is front and center. But he's stayed in the rear. You see, his desk was once occupied by Senator John F. Kennedy, and Biden obviously likes the ambiance.

The office that Biden maintains at the Senate Office Building is, amazingly, the former Vice Presidential suite. Dixiecrat James Eastland, a bitter foe of civil rights legislation, had a stranglehold on those chambers. But when he retired, Eastland "willed" those offices to Biden. Another Dixiecrat, Senator John Stennis, gave him the huge oval table that southern senators used to plan their filibuster strategies to extend Jim Crow. Stennis told Biden, "It’s time this table goes from the possession of a man against civil rights to a man for civil rights."

If Biden could have such an impact on bitter foes of civil rights on what is called "Confederate Row," he just might have an impact on some dubious Yankees in the Keystone state.
Posted by Bernie O'Hare at 8/28/2008 01:46:00 AM

I will correct my typo. Sorry.

I remember Biden telling me, "Four score and seven years ago; I consider myself the luckiest man on the face of the earth; Mr. Gorbachev, tear down this wall; I have a dream; ask not what your country ..."

And I think he really meant it.

The fact is... everyone in Delaware hates Biden... he has done nothing for them... except advance in his political career full of self-interest.... most Delawareans are happy Biden is a VP candidate means they will finally get a Senator who actually does things for Delaware.

Steve Barron must be the biggest naive a**hole to even comment to this blog. When is he up for re-election?

I think he is adorable. who wouldn't want to pinch those cute checks, right Bernie?

Steve Barron must be the biggest naive a**hole to even comment to this blog.