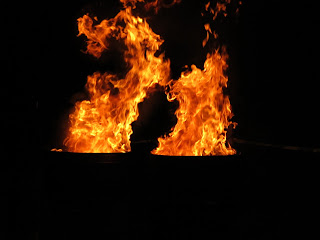 Instead of speaking, politicians like State Rep. Marcia Hahn listened as Port Authority worker Michael Mayurnik described what it was like to be on the 69th floor of the World Trade Center when its 97th floor was hit by an airliner. After looking out a window and seeing paper and other debris flying everywhere, one of his co-workers said, "Let's get the Hell out."

And so they did. As they and other lucky ones were leaving, New York firefighters were making their way in, some to never return.

After this remembrance, the crowd shuffled outside the Community Center for a moving flag retirement ceremony performed by Notre Dame Boy Scout Troop 352, assisted by Scoutmaster Michael Caffrey. The Stars and Stripes was presented to scouts by Bethlehem's Mounted Police Unit, which had slowly winded its way through the Township park in what seemed like a funereal procession.

During this ceremony, the colors were separated as Liberty High School bagpipers Victor Neumann and Krysden Schantz played "Going Home." One scout held the blue field with 50 stars, as others cut away each of the thirteeen red and white stripes of Old Glory. Master of Ceremonies Joshua Soares called our American flag, "the silent sentinel of freedom." Then that flag, and about fifty others, were placed into two barrels.

As flames and billowing smoke climbed climbed from these twin pyres into the evening sky, it was yet another reminder of the conflagration at the Twin Towers on September 11, 2001.

Mr. O'Hare. As a Hanover resident I've attended all 9 9-11 nights. It is always done with class and dignity.

Hope I captured it accurately.