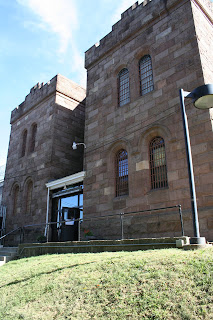 Northampton County Executive John Brown has signed an Executive Order for a no-bid contract with DLR Group for a master plan for a new jail. I told you earlier this week that he may have avoided the competitive bidding that would otherwise be required under the county's Administrative Code. At Council's June 1 meeting, Council Solicitor Phil Lauer agreed. In addition to being an improper "sole source" contract with no competitive bidding, Lauer advised Council that the Administrative Code requires that contracts for professional services must go through some type of bidding process.

Council President John Cusick told Brown that a jail study is sorely needed, "But I can't help wondering if a step was missed in the process, and that step would have been to put out an RFP [Request for Proposals] right at the beginning."

"I could understand putting out a bid just for the exercise," said Brown. "I don't think it's an exercise," countered Matt Dietz. "I think that's how we're supposed to run things."

Peg Ferraro was troubled, too. "I just don't understand how you can have a design without having a site selected," she said. "To me, it sounds like you've already decided you're probably going to have it in green space, probably out at Gracedale, instead of a high building like out at Lehigh County."

Brown agreed that he's already ruled out a high rise. He said the cost would be "exorbitant." He later said he's looked at a dozen different sites throughout the County.

"I agree with the Executive," said Mat Benol, who has been one of Brown's most faithful rubber stamps. "I think we have to trust the expertise of [Director of Corrections] Keen.

"It seems like we're so married to DLR at this point that DLR will be the design firm, complained Hayden Phillips.

"I'm not wed to anybody," responded Brown, which will be news to his wife.

"I have a problem with this not being competitive," said Hayden Phillips. "I think we should have followed the Administrative Code." He called it an "issue of efficiency vs. transparency. ... Transparency makes me want to have a bid on this. Open it up."

Brown said competitive bidding in this instance "is just a waste of time and energy."

"It should be competitive," said Bob Werner. "We should look into some local people who can build."

Will Council sue? "I just don't like it when two branches of government are in litigation," said Council Prez John Cusick. A majority of Council was critical of Brown's failure to seek competitive bidding, but are unwilling to stop him in Court.

Blogger's Note: This report is based on a video of the meeting.I was at Summer League basketball, where Allentown Central Catholic's Vikings are now 3-0 after defeating Liberty, Becahi and Nazareth.
Posted by Bernie O'Hare at 6/02/2017 02:02:00 AM

They are just mouthing lukewarm complaint because they are in an election year. Why do you think they let Benol signal their real feelings. He isn't running for re-election so he can carry the real agenda torch. This county council will hem and haw, and be shocked, just shocked at Brown's non-bid. In the end, after the election they will be full on board on a new $100 million prison next to Gracedale They will then promptly sell Gracedale to a private company.

Voters are easily fooled and will continue to vote foolishly.

Who would want to be in a nursing home, let alone buy one that is sitting next to a jail? why would you put a jail smack in the middle of a residential area in a township? How about they put it in Bangor.....plenty of green space out there. Or is there too much "brown" space there?

This is the public relations contract all over again brownie doing any thing he wants. Time for a change. Council has to sue or we should just throw administrative code away. If council doesn't fight this they should be voted out also. Follow the rules people that's what we elected you to do

Good on Brown, a new prison is decades over due. In this case just get it done.

Almost all of council and the solicitor agree Brown's violation of the Administrative Code, however, they don't have the gonads to challenge him. What good are these fools on council. At least Matt "the Rah-Rah" Benol shows his true colors, while the others try to distort the voters. This shows the non-transparency of council and their blind support of our fearless leader John "Big Bad Leroy" Brown. These people are a joke and must be voted out! Wake up N.C.!

Vote Brown and his rubber stamp, do nothing council out!!! Wake up voters!

Sorry, off the subject but what credentials does the new Asst. Deputy Director of Administration have?????

"I could understand putting out a bid just for the exercise," said Brown. "I don't think it's an exercise," countered Matt Dietz. "I think that's how we're supposed to run things."
"I have a problem with this not being competitive," said Hayden Phillips. "I think we should have followed the Administrative Code." He called it an "issue of efficiency vs. transparency. ... Transparency makes me want to have a bid on this. Open it up."
Brown said competitive bidding in this instance "is just a waste of time and energy."

Mr. Phillips and Mr. Dietz get it, among others. Mr. Brown makes it difficult for this conservative to "be on his team", so to speak. His attitude toward following the laws NorCo has in place to provide checks and balances and transparency, whatever his reasoning, even if well-intentioned, are quite troublesome. Mr. Brown has trouble listening to those who put him in office. Phrases such as ..."just for the exercise”. and ..."just a waste of time and energy." show disregard for the very citizenry who pay his salary and for whom he works. It is not only about what John Brown thinks is best or wants. He may indeed be right. Perhaps he is. However, it is not about you, John, it is about... We the People!

Could the prison go on the site of the abandoned illegal alien prison near Bangor that was proposed a few years ago?

The prison should be built on its current site. Transporting prisoners from Nazareth to the courthouse for hearings would be a big expense. Less security as well. Tear down the old prison and build a 2-3 story modern building in its place. Meanwhile, house those prisoners at other facilities. Would cost the county for remote housing, but work out better in the long run. Nazareth and Gracedale would not want a jail out there for a number of reasons.

Wasn't the Bangor location the prison Ron Angle wanted to have built?

Anon 6:15. That was in upper Mount Bethel and Mr. Angle was pitching a private prison to house illegal aliens a few years ago. The site is still available.

Received a speeding ticket going down 33. Told the officer it was just a waste of time and energy only going 65. He didn't buy it got the ticket anyway

Not the Angle illegal alien prison project, not that again. Please no prison up here Mr. Angle.

The only reason Nazareth don't want a new jail built in their territory......is because there all racist!!!!!