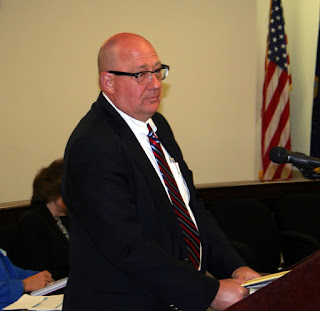 Northampton County Coroner Zach Lyesek, known for asking everyone he meets how they're feeling, has been missing for several weeks. He was last seen in the company of Bethlehem Attorney Jim Broughal. The two were apparently headed to see Lysek's brand new 16-slice body scanner. Lysek had been telling everyone that Broughal looked a little pale.

"I treated him like the Viet Cong," said Broughal, a decorated Vietnam War veteran. "Coroner Cong."

Though asked to open a missing person investigation, DA John Morganelli refused. "Nobody liked the guy," said the prosecutor. "Every time he saw me he was checking my pulse."

Lysek is also known for sickening  the entire County Council with very graphic descriptions of what he does.

I hope when it is your time Bernie, he takes embarrassing posed pictures of you and puts you in an used bag. Now that is respect earned.

He's already done that, but I was just sleeping and escaped.

Bernie, to hell with the pulse check because the heartless don't pump blood, worry when he try'z to tag your toe!