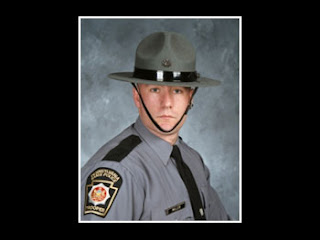 Yesterday was the 8th anniversary of a Nazareth nightmare. Daniel Autenrieth was supposed to dropping off his children at his ex's Nazareth home. Instead, he entered the house with a gun, threatened her, and left with their none year old son. A 40-mile pursuit ended in a gun battle between state troopers and Autenreith. Troopers Robert Lombardo and Josh Miller had stopped Autenrieth's car and were rushing the car when the shooting started.

Miller was hit in the neck and Lombardo was wounded in the arm. In the meantime, Tatamy police officer Fred Lahovski and a state trooper approached from a different direction and covered the boy with their bodies. Autenreith and Trooper Miller both died that night.

Wow! Your hatred of the Nazareth leadership is so sick that you would use the death of this brave trooper as a shot against the borough. You are one sick dude.

The truth hurts. The trooper died for a borough that never thanked him.