In Memory of Frank Meluskey 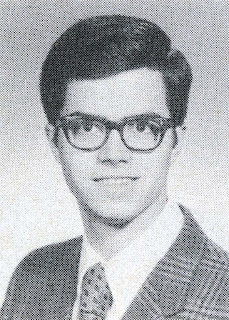 This is a story about Frank Meluskey, a State Rep. who served in the 133rd legislative district when it was still mostly in Bethlehem. Though a bit on the dorky side, everyone thought he had a promising future. But he died suddenly at age 26 in late 1978 while vacationing with his parents in Florida. He had only been in office for one term. And that was that.

His mother Mary did her best to keep her son's memory alive until she herself passed on.

Like her son, she was involved in the local Democratic party. When Teddy Kennedy came to Bethlehem, she was a part of the throng inside the Steelworkers' Hall.

She carried with her a large photograph of  her deceased son. As Teddy made his way down the aisle, she waved the photo and shouted out to him, "Senator Kennedy! Senator Kennedy!"

With all the noise, Kennedy had a rough time hearing Mary as she told him her son was a State Representative who died before his time. She wanted him to sign the photograph, and passed it down the row

And he did autograph it.

When Mary got it back, it read "To Frank, Keep up the good work in Harrisburg. - Teddy Kennedy"

Another thing Mary did was commission a bust of her son. When it was finished, she visited Bethlehem Mayor Paul Marcincin and presented it to him along with a glass casing and a pedestal. Along the pedestal, there are about seven or eight plaques in her son's honor. 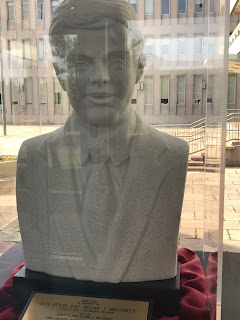 Now Meluskey was a State Rep, not a City official. But Marcincin wanted to be nice to this grieving mother and told her he'd accept the gift. In fact, he told her he'd keep it in his office as a reminder of good government.

But over time, Marcincin grew leery of this bust. It actually looks more like The Joker than Meluskey. It  began to scare Marcincin. So he decided that he was being selfish by keeping it in his office. He decided to present it as a gift to a group that could always use a good scare.

As with Marcincin, this bust creeped out City Council. They decided it belonged in a place where it could really be appreciated by the public.

Today, you can see the Meluskey bust in the walkway between Town Hall and the City Hall. If you notice the eyes following you, join the club.
Posted by Bernie O'Hare at 6/29/2017 12:00:00 AM

Creepy story Loving ones son is one thing, but statutes, plaques and the rest of it ......

Some honor and respect for a moment to the sculptor of this portrait bust, Tom Bugbee. Or Bugbie, I can't quite recall the spelling. He and I attended the Temple University/Tyler School of Art joint Rome, Italy campus back in the mid-1970s. He was, and I hope still is, passionate about sculpture. The bust is of Carrara marble and I know he selected the stone himself at the quarry.

I know a lot of love went into this work. Commissioning a portrait is an act of respect and love. I'm happy it's somewhere people can enjoy it as they pass through. Like it, love it, or feel unnerved by it, it's a physical manifestation of passion and creativity. My hat's off to the artist.

I knew Frank Meluskey and briefly met his mother. She was absolutely devastated by the loss of her son. Her grief and attempts to memorialize him were her inner most personal feelings. I do not believe it is right for me to judge her as I would not judge any mother who lost her child. Frank himself was an idealistic young man who thought government should be run exactly as the high school civics books suggested was proper in his time. He acted according to the high standards in which he believed and never lived long enough to be faced with a rationale to compromise himself. The same cannot be said of some of the senators and representatives in Harrisburg today. I do not condemn all of them who serve there but a number of them could not look that statue in the eyes and come anywhere close to equaling Frank Meluskey's dedication and standards. Until I read this blog post I had largely forgotten about Frank but today I am wondering what he would think of the sad state that Pennsylvania government has become.

Had Frank's mother or father still been alive, I never would have written the post I did. I just couldn't stop laughing when I heard about the Kennedy picture and then found out about the bust. I was unaware that the sculptor, Tom Bugbee, is still among us. I can say without equivocation that I find his bust unsettling. But I'd agree it is art.

You are absolutely right. My post was intended as humor.

I'll never forget him. I never met him, but I've yet to see his like. He was my state representative.

I know you wrote this to tell the funny story of the past, and the story about Ted Kennedy. But I wanted to put in about what a great representative he was.

I was told he was gay. Apparently, a high school friend was aware of this.

So the fuck what?

We wanted a bust of Bernie in City Hall but we couldn't find a hunk of carrara mabrble big enough, time to get back on the bike Bernie.

i happen to like this bust very much as I do Tom Bugbee, who created it. I have fond memories of Tom, being a fellow alumni from Tyler School of Art.