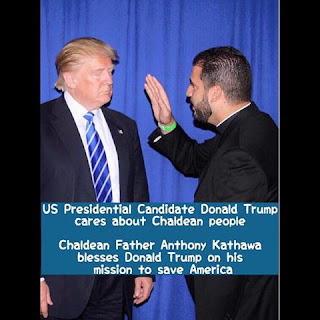 Kristallnacht, or Night of Broken Glass, is how we commonly refer today to what were actually two nights of organized violence against the Jews in Germany, Austria and parts of the Sudenland. Instigated by Joseph Goebbels, these pogroms were carried out by storm troopers and Hitler Youth. Not that there's ever been a good time, but that was a particularly bad time to be a Jew in Europe.

These days, it's a particularly bad time to be any kind of Middle Easterner in the United States. Violence against Jews continues, as it has for centuries. But now there's a new twist. Middle Easterners of all persuasions are in for it. Now Muslim women riding a train in Oregon can be subjected to ridicule, and two men who dare defend them are stabbed to death. And over the weekends, there was a Kristallnacht, Trump style.

Chaldean Christians fled to this country to escape persecution in the Middle East, where their numbers in Iraq alone have dropped from 1.5 million in 2003 to just 300,000 today.

Many of them have relocated to Detroit, whose population of 121,000 Chaldean Christians is the largest in this country. They largely voted for Donald Trump, but certainly are having second thoughts now.

On Sunday, Immigration and Customs Enforcement (ICE) agents began rounding up Chaldean Christians in Detroit to send them back to Iraq. They picked up between 30-40, according to The Detroit Free Press. According to CNN, one family was rousted at the beach.

Many of them have committed minor crimes (marijuana possession, assault) that are now decades old According to The Minority Humanitarian Foundation, which was organized for victims of ISIS, most of them are here legally.

RT, which claims the number of arrestees might actually be as high as 80, reports they have been bused away to Ohio, and they will be deported from there to Iraq.

I'm sure ISIS will welcome them with open arms.

“This is a deliberate attack on the Chaldean Catholic Assyrian community of Detroit by the Administration. They waited until Sunday when our community would be going to church and gathering with their families and have rounded up to 40-60 community members,” said Chaldean Christian lawyer Wisam Naoum. "We've been working on this around the clock. From what we are seeing, most of the people that have been detained do, in fact, have a criminal record. However, some don't and are just refugees getting caught up in the sweep. The vast majority of them it appears have already served their time, many times decades ago and often involving non-violent crimes like marijuana possession. Some have final orders of deportation and others don't. The bulk have been sent to Ohio and we are waiting to learn more about final destinations."

Whether they wear swastikas or American flag patches, this is how authoritarian regimes operate. In both cases, the innocent suffer. The rest of us look on, completely ambivalent to the notion that it could be us tomorrow.
Posted by Bernie O'Hare at 6/13/2017 12:00:00 AM

So now Trump is a Nazi Bernie?

Leftists are always coercing people what to do. What do you think Obamacare was about? Forcing people to accept government-sponsored mandated healthcare.

Castro's Cuba, Hugo Chavez... all of these regimes are cut from the same cloth.

Detroit has become a major center for Arabs both Christian and Muslims. They live side by side in peace. Something, we should hold up and applaud but not in these times. What great propaganda for the American way of life, to show the Arab world. Arabs lining in peace free to practice their faith. Only in America. Don't hold your breath. When you campaign on hate and fear, you need something or someone to hate and fear, you need a villain. The Donald has given his supporters their red meat.

If he is doing this to the ME Christians, can you imagine what awaits the Muslim community in Detroit.

I am sure ISIS is writing up their recruit scripts as we post.
Sad days indeed!

He is an authoritarian and so are most of his supporters. They are no longer true conservatives. I do not think Trump is Adolph Hitler or that his supporters are Nazis, but the analogies are there.

The "so-called" President of the United States.

Today POTUS had his entire cabinet, one by one sing their praises to him. All the while Kelly Ann sat in the back, a smile beaming on her face. I was only born in the sixties, so what I know from the thirties and forties is what I read and have been told. POTUS is slowly mirroring the people 12:46 mentioned. And as long as his minions and blindfolded supporters keep following him and feeding his ego this country is going to repeat history. And we won't be on the side of the good this time.

Trump is a buffoon. But the anti-Trump screeching is getting to be a test pattern with white noise. If you're here illegally, Christian, Jew, Muslim, or anything else - you need to leave and come back legally. Why is this so hard to understand? The alt-left says immigration can't be controlled, but the global climate can. I think they have their vagina hats on to tight.

Its, the progressives, "communists" and other socialist governments of the world, that have as a rule, slaughtered their people in an effort to force them to comply to their system that is compulsory everything, no freedom, no liberty.

Hey Bernie you sure can TWIST!

Loyalty over country is very distasteful!