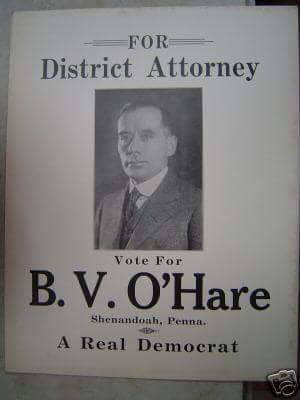 Most of you are reminded daily that I was once a practicing attorney  Many of you know that my father was also a lawyer. But few of you know about the original B.V. O'Hare. He was a lawyer, too, and lived in Shenandoah. That's in coal country.Shenandoah at one time had the distinction of having more bars per capita than any other place in the world.

As a young boy, I had a habit of rising early every morning, around 3 am, and visiting the neighbors. Some of them apparently took exception, so I'd be exiled for a few weeks at a time with my grandparents.

I loved these vacations.

My grandfather had hundreds of pocket watches and would always give me one or two of them. He also gave me American flags, and I'd conduct one-person parades up and down Cherry Street.

That's where I met my first girlfriend. She was blind from birth and would give me very vivid descriptions of what things looked like in her mind.

Sometimes, she would join my parades. It would be the dumb leading the blind.

My grandfather always took me to work with him. He liked me. We'd walk. He walked everywhere, and would let me pound on a broken typewriter in his office while he met with clients.

After dinner, we'd always go for another walk.

With all the walking he did, you might think my grandfather was quite healthy. But he was actually quite sickly. We'd walk a block or two, then he'd tell me to wait on the corner while he'd see the doctor for his shot.

Sometimes he was so sick that he needed two or three shots.

He had the corniest jokes, too.

"Did you hear the story about the three eggs?"

My grandfather attended no college or law school. In that day, would-be lawyers could clerk for someone and study for the bar. He made sure that his younger brothers, Felix and John, went to college and law school at Georgetown.

I have no idea whether this is true, but my great-uncle John is reputed to have played a role in founding the school newspaper, called the Hoya. That's a fitting name for a newspaper because Hoya, as some of you know, is Greek for "What."

Unfortunately, my great-uncle John passed away on the day he discovered that he had passed the bar exam. My other great-uncle, Felix, practiced law with my grandfather. But he died young, too.

My grandfather was quite political, as you see above. He ran unsuccessfully for District Attorney during a time in which Republicans were very powerful.

In 1928, my grandfather also ran for US Congress. On the campaign trail, he became friendly with Presidential candidate Al Smith, who like my grandfather, was Irish Catholic.

On election eve, Smith sent my grandfather a telegram saying, "See you in Washington."

The next day, my grandfather sent a telegram to Smith saying, "Won't be there."

Smith's loss is explained in Wikipedia:


Reporter Frederick William Wile made the oft-repeated observation that Smith was defeated by "the three P's: Prohibition, Prejudice and Prosperity". The Republican Party was still benefiting from an economic boom, as well as a failure to reapportion Congress and the electoral college following the 1920 census, which had registered a 15 percent increase in the urban population. The party was biased to small town and rural areas. Their presidential candidate Herbert Hoover did little to alter these events.

I suspect those factors were in play in my grandfather's loss as well.

What does the V stand for?

visiting the neighbors at 3am. as a young boy. now we see that the sociopathic behaviors are deep rooted, and started very early in life. explains alot about your untreated mental disease. thanks for the info.

Mentioning Hoover and the Depression, it is obvious this is a veiled shot at President Trump. I guess you would have loved it if Kilary had been elected. President Trump is already putting the world on notice, we are the big guys on the block. Too bad country hating libtards.

Actually, this is a story about my grandfather. I do think Trump is terrible, but have never been one to take "veiled" shots. I am very direct. Also, I know enough about argument to know that the best way to lose one is with name-calling like "libtard."

Great story about your grandfather Bernie, really enjoyed reading, thank you for sharing it with us.

At least Donald Trump is anti-islam terrorists. he is not tolerant like the last guy. We need to be strong and the President is going to keep us safe.

Your comment in support of an authoritarian has nothing to do with my post. Do your goose-stepping elsewhere.

Bernie, damm they are taking shots at your delightful story. I had thought the V was for Vendetta!