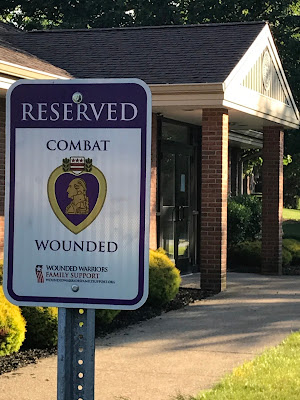 Though most of you consider me a harsh critic of local government, I'll let you in on a little secret. Most of them are quite good, thanks to committed employees and elected officials who care deeply about their communities. Hanover Township is perhaps the best run of them all, and the picture you see above explains why. The choicest parking spot at the municipal building is reserved for wounded warriors.

I was there last night to cover a Supervisors' meeting that actually took place a week ago. I do that sort of thing, which explains why I'm far from the best reporter.

I was so blown away by this sign that I called Manager Jay Finnigan. He said it was just installed that day, along with another at the community center. Finnigan refused to take credit. He said they were seen in Colorado and he considered them "appropriate and deserving for those who served."
Posted by Bernie O'Hare at 6/21/2017 12:00:00 AM

You have a bromance with all things Hanover Twp. and especially your mancrush Finnegan, so no one is surprised. They copied an idea and you are embarrassingly gushing.

2:22 you should try to get some sleep. Class decision by a class municipal government and individual. Finnigan could have taken credit but chose to give credit where credit was due.

The people that work in Hanover township at all levels are different than any municipality that I have seen. They not only take pride in their work, the take ownership of it. The streets and parks and treescape are well cared for, it like each employee say I OWN this street, I own this park, it has my name on it and I am proud of this! Other municipalities TAKE NOTES

I my humble opinion 'Handicap' spaces are constantly abused. Too many window passes used by whomever's in the car that day. I took pictures at WAWA on college hill one morning, not one person had bad knees or used a cane,or got out of vehicle with difficulty.These people are lazy and inconsiderate and one lady no tag -in your face violation,ties up spot for her smokes in a hurry. The person with the right a way to park there should have photo of them on window tag that is so easily abused. So the decision to have 'Combat Wounded' additionally holds open space so deserving that the abusers probably would not use it. Smart.

Nice gesture, but how does law enforcement know the person is a combat wounded veteran?

Some combat wounded have the Purple Heart on their license plate. For the rest it's a matter of honesty.

This is a great gesture, one to be mimicked by other townships.

Agree. Any person who would steal the valor of a wounded warrior is beyond whatever penalty a police officer could impose.