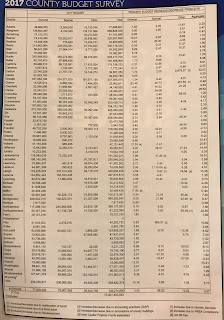 Of Pennsylvania's 67 counties, Northampton County has the third highest percentage budget increase this year, according to the Spring 2017 edition of Pennsylvania County News.

Though Mifflin and Indiana County had the highest percentage increases, but those are one-time occurrences due to accounting changes (Mifflin) and prison reform compliance (Indiana). I excluded them.

A fine example of phony businessman Brown, who brags about his efficiencies, and the work of his "high performance team" of overpaid cronies.

With the phony "conservative" Brown and the "tea party" republican county council you would think costs would decrease. They campaigned on one thing and then run things differently. Hypocrites in one sense but basically just in way over their heads. Not one of them is a capable county official. Give them their walking papers before they decide to build a new 150 million dollar prison in the middle of Nazareth.

Bet it is because of the Trapp Budget!!!! Get rid of her!

Efficiency, transparency and reliability are words that cannot accompany John Brown, his administration or his cronies on county council. Fire these jokers on election day.

Yes, and the county executive can veto a budget he doesn't like. Which Brown failed to do. He and council are in cahoots. They let him hire unqualified cronies and overpay them and he blesses their budget.

Wow! One of the largest budgets in the state and a 10% tax increase to boot. The current county leaders are indeed a real crew!

In your wildest dreams, did u ever think u would write County Executive McClure.

Yep. So much for the "Tea Party" in Norco. Meanwhile in Lehigh County, we have had four millage rate reductions, small but Reductions, keep running surpluses and have not cut critical surpluses. The so-called "Hilliard Method" coined by this blogger actually works!

Don't know why my name wasn't shown. I never post anonymously but I couldn't get past Bernie's security wall! Haven't posted in years but this was needed.

And I meant "cut critical programs"...