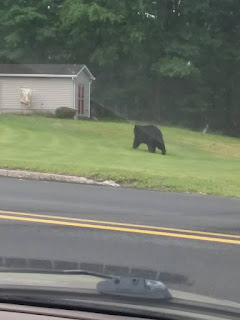 Bangor High School is supposed to be the home of the Slaters, but in reality, it might be the home of the bears. A reader at Slate Belt Watch, an informative Facebook page, reported seeing what looks like a fairly large bruin lumbering near Wah Shing.

There have been several other reports in the Bangor area.

Tis that time of year.....Slate Belt Regional Police Department has been receiving numerous calls recently regarding black bear sightings in the area. Our perceptions of bears are a product of their mostly shy, mysterious nature and powerful presence, not to mention the timeless stories that have been told about them over the years. Unfortunately there's as much misinformation about bears in circulation as there is fact. That's too bad because bears needn't be feared nor should they be dismissed as harmless. They simply need to be respected. Here is a great article regarding living with bears. The goal is to avoid creating a "nuisance bear" and to allow them to pass through the area respectfully. Unless the bear becomes a nuisance, Officers will generally have the same response as you, cautiously and respectfully watching as the bears make their journey away from civilization.
Posted by Bernie O'Hare at 6/07/2017 01:31:00 AM