A Brief History of My Life 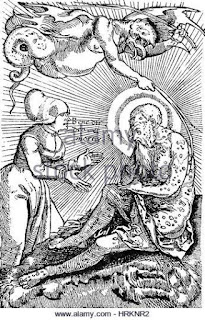 Though you must often think otherwise, I actually do have some friends. One of them, on the occasion of my upcoming 39th birthday, has written a mostly accurate biography of my life. I thought I'd share it with you. I'd like to identify this raconteur, but he has threatened to pull monkeys out of my ass if I do.

Friends, I realize I'm a little early here, but I'd like you all to remember to wish Bernie O'Hare a very happy, and special birthday this weekend. On Sunday, June 18, Bernie will turn 666 years old, and I'm sure you all understand the significance of that milestone for one of his....I don't know...is species the right word? Hell, we'll go with that: species. Since most of us only know Bernie as our colorful local blogger, I thought I’d add some little known facts about his earlier life.

Born in the year 1351 A.D., in the wee village of Bally Focáil Leat, County Feisigh do Thoin Fein, Bernie was predeceased by his parents, a humble shepherd, and a prized Galway sheep. As an orphan, Bernie was initially raised by the local parish priest, a man known for his kind heart and remarkably poor judgment. When the inevitable exorcisms failed, Bernie was run out of the village, and eventually expelled from Ireland. As a result of this, he naturally chose to practice law. 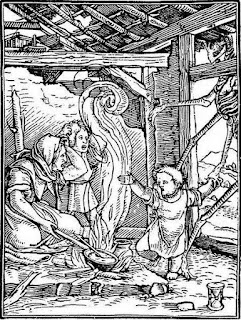 Wanderlust took the (relatively) young O’Hare, and he travelled the world as an itinerant attorney, making stops in London in 1665, Vienna in 1679, and Sweden in 1710. Advances in both European weapons technology and pubic hygiene standards, however, eventually led Bernie to the New World, landing in Pennsylvania in 1763.

A proud veteran, Bernie served the military in the Revolutionary War (U.S.A), the Civil War (C.S.A), the Great Sioux War of 1876 (U.S.A., Lakota, and Shoshone), World Wars I, II, and III (he doesn’t like to talk about the latter), and the Korean Conflict (DPRK). As a soldier, Bernie was primarily responsible for shooting the wounded.

Pictures of Bernie are hard to come by, as he doesn’t really show up on film, but I’ve managed to locate some old woodcuts of Bernie in his youth. The first is of Bernie litigating in front of some villagers, the second of him at a window, accepting a fee from some grateful clients.

Email ThisBlogThis!Share to TwitterShare to FacebookShare to Pinterest
Labels: personal

You don't look a day over 665. many happy returns of the day.

Happy Birthday Bernie, I hope you enjoy your day. Thanks for reporting the news no one else reports. Keep up this public service, many of us appreciate it more than you know.

Lol. Sorry I missed wuahing you a happy birthday earlier. Thanks for your exceklebt and humor-filled reporting.

A friend wrote the that tribute ? Your enemies are left with ample slack.

Bernie, I personally love the touch of the parable written in redd like the scriptures like Jesus Christ's spoken word. Than the pictures really detail today's life and times that a soul must carry as a message to the world.

Just maybe some of the twisted tales thought and mentored were repercussions of today mentality in the world!

Than for that birthday gift and tear that tag from your toe because only the good die young and at 666 you are but a wee ladd!

I thought it was flaming monkeys out of your ass.

12:03 am
Bernie, the only flaming monkies out an ass are by design and personal choice of assklowns and there infectious illz factually faked while a blind eye is looking! These particular subsect of humans are truely the lower class species of humans them and there make claims of you being as the humorous assklowns they infact are and should not even be in the classification of being human like.
Happy birthday and grandfathers day, I hope you and your grandson will be walking and talking with his nittle big puppy this weekend without handheld gagetrey in hand!

Happy birthday Bernie. You are indeed a treasure.

Glad you're in The Lehigh Valley.

Wishing many more happy and healthy years of blogging...

always look forward to your posts

thanks for all you do