Gracedale Some Good News and Some Bad News 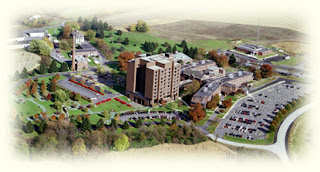 Earlier this week, I told you that ratings for Gracedale, the Northampton County-owned nursing home, have taken a nosedive. It has dropped from four stars in January to just one star as of today. To make matters worse, its going to stay there for some time.

This rating system is a product of the Centers for Medicare and Medicaid Services. One star, which means "much below average," is as bad as it gets for a nursing home.

Raymond Soto, Gracedale's Administrator, told Council he expects to see the nursing home to stay in the basement for some time, possibly until next year.

As disappointing as this poor rating is, there's some good news about Gracedale, too.

First, reimbursements from Medicare and Medicaid are going up. The case-mix index (CMI) is at 0.91,and this is what determines how the nursing home gets paid. Both Soto and Human Services Director Allison Frantz explain that the negative rating has no impact, one way or the other, on reimbursements.

Second, Gracedale will be receiving a $2.2 million IGT, or intergovernmental transfer, from Uncle Sam at the end of June. NorCo Budget Administrator Doran Hamann, known for his fiscal conservatism, has told Council that he expects to see Gracedale break even or make a small profit again this year.
Posted by Bernie O'Hare at 6/16/2017 12:00:00 AM