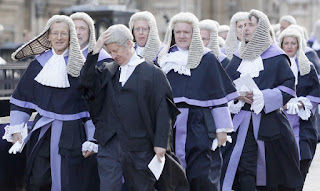 I'm sad to say I have no pictures of Clinton Bud Palmer, who was President Judge in Northampton County when I first started practicing. I tried my first case in front of him, representing a bar owner who made the mistake of selling booze to an undercover cop after hours. He then compounded his error by hiring me as his lawyer. Palmer let him off the hook. I think he felt sorry for the guy.

In those days, the judges always had lunch together in a little alcove right by Courtroom Number 1. They were served by the inmates, who at that time always had one or two chefs doing time. As good as the food looked and smelled, there is no way I would ever touch food that inmates knew was on its way to the guys who had sentenced them. But it was a different time.

During criminal court week, the President Judge would call out the cases to be heard that week on Monday. In those days, there might have been a hundred. I remember on one occasion, there was an older guy, dressed shabbily, sitting in the back with a paper bag. He looked inside from time to time.

This guy had been charged with some kind of petty offense. When his case was called, he got up and in a loud and booming voice, said "Guilty, your Honor."

Judge Palmer called him up to explain and he did. He told the judge it was getting cold outside and he needed a place to stay.

"If you don't shut up, I'll give you probation."

I told that story to a local veteran lawyer today and he added a few of his own.

This lawyer once represented a very nice little old lady who was unable to stop shoplifting, and had been before Judge Palmer many times. She was always very sorry. She always promised it would be the last time.

"I don't know what I'm going to do with you. I understand you have a problem, but I have to protect society, too."

The third story involves a person I call a wickey flicker,a guy who has some kind of compulsion to expose himself to women. I used to represent one of those guys. His name was Balz.

This story involves another wickey flicker, who had been charged with indecent exposure. He was in the back of the courtroom, probably feeling a little embarrassed, during a call of the list.

Those were days were judges had discretion over sentencing. It was a better time for justice but no more.

Bernie, I was honored to be at many of those lunches with President Judge Clinton Budd Palmer 1974-75 while I was law clerk to Judge Michael Franciosa. The then-four judges and their law clerks did indeed eat those delicious (free) inmate-prepared lunches in that little conference room across the hall from magnificent Courtroom 1 (where Judge Palmer's portait now hangs). We clerks had the pleasure of listening to many of Judge Palmer's funny stories (plus less-funny ones about his "Uncle Mitchell" -- who Judge Palmer hated -- the infamous A. Mitchell Palmer, U.S. Attorney-General who in 1919-20 led the mass arrests of labor leaders, activists, immigrants and other so-called "Reds"). The judges often shared law clerks and I remember sitting in Courtroom 1 several times when Judge Palmer noticed a jury being bored and would interrupt testimony to tell the jurors a joke to regain their attention. To me he has always been the model of a good judge: smart, fair and funny. I never saw him treat a lawyer or witness other than with kindness and respect.

Thanks foryour insight, Don. I really admired and miss him.